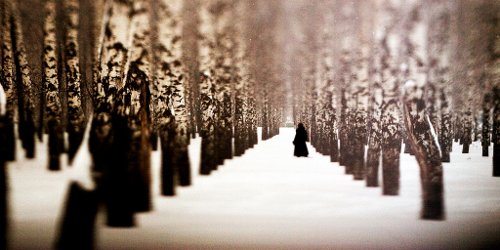 While I am almost impervious to cold, I hate the inconvenience of winter. Imagine the shock-and-awe factor of a blizzard before the urban industrial era. People must have looked out into the eerie silence of a storm, a thick, blank curtain of white dampening even the wind's whistle, and prayed to their higher being for safety and survival.1 Now, I get a snow alert on my phone and think: "Blast! If this causes me fifteen minutes of delay on the commute, I'm going to lose it!" I know, #ModernWorldProblems. In fact, after an ice storm that darkened Toronto into the new year for 2014, we've been lucky enough to avoid most of the chaos this winter. My condolences to Buffalo, Chicago, Boston and those on the East coast in Canada and the US.

The upside to darkness and inclement weather is the time I have inside to prepare an assault on two high peaks: the book pile and Mount Sample. Generally, I wear whatever fragrance I feel like at any time of year, but almost all perfumes conjure a particular season for me and the ones that evoke winter probably get less of my air time than most, merely for practical reasons. (Who will wear Guerlain Attrape-Coeur on a warm day in May? Not I.) My personal strategy for combating winter, then, is to dig out those under-loved warming, rich and sweet scents. But I do empathize with those who use the opposite approach, the denial method. If you'd rather imagine yourself on the beach in Aruba today, please read Robin's post on winter citrus scents or Robin or Angela's tropical suggestions. (In this latter vein, I do sometimes try for a fragrant "greenhouse effect"; the last scent on this list fits that bill and goes out to the dreamers.)

Please recommend your own winter favorites in the comments and check out the lists at Bois de Jasmin :: Grain de Musc :: The Non-Blonde.

Slumberhouse Ore: Waving away a blotter, a friend of mine recently dismissed this as "a very nice cocoa butter scent". I also find it a bit air-headed, but consciously and deliciously so. The Lolita angle here is that nose Josh Lobb has based the core of the fragrance on Carmex lip balm. Ore stays true to that sexy, silly spirit, but with notes of cocoa, oak, vanilla, whiskey and Balsam of Peru, it is darker and less mentholated than the famous potted salve.

Bond no. 9 Chinatown: I don't have a recognized synesthesia, but smells are very textured to me. The gloss of Chinatown feels like pearls or lacquered furniture, as if the smell is a tactile treasure from David Kidd's Peking Story. It's a masterful bit of Orientalism by Aurélien Guichard, and an ideal fragrance to set against snow.

Ralph Lauren Notorious: Ill-suited to its name and marketing campaign, this one wasn't around long. Too bad, because it's a lovely, low-key comfort scent. Robin wrote it could work as the fragrance for "'Fresh Cocoa Woods' dryer sheets" and there's definitely something about that idea that captures the snugly, familiar feel of the thing. After a bright peppercorn and bergamot opening, the middle section is very 1950s Mom, with the creamy balsamic cola notes everyone remembers from orientals like Tabu and Youth Dew. Meanwhile, the base bears some resemblance to the far dry down of Chanel Coromandel: imagine, if you can, that the latter's patchouli has dispersed and you're left with a powder poof of musky white chocolate.

Bogue Maai: Now this could be called 'Notorious'! Stand back, gentlemen, retro glamour coming through. Released in 2014, Maai is a massive resinous floral chypre, a sort of radioactive Norell,2 full of soapy aldehydes and ylang ylang and animal notes and oakmoss and everything else the contemporary perfumer must avoid. But Antonio Gardoni dared for us. Distressingly expensive, as is fitting.

Etat Libre d'Orange Rien: Another middle finger at current fragrance regulation and trends, this time by Antoine Lie. In an interview at Grain de Musc, Lie reveals he composed Rien as "revenge", using an overdose of restricted notes from classical perfumery: galbanum, aldehydes, castoreum, iris, oakmoss and patchouli. The result is a bitter, elegant leather chypre, to be worn with a sharply tailored suit and combat boots.

Parfumerie Generale Indochine: Benzoin scents are usually the olfactory equivalent of "Riders on the Storm" by The Doors for me: I'm lucky if I can make it through the droning without lapsing into a coma. Indochine adds cardamom and a lot of honey, and while still powdery and meditative in style, it smells more like gingerbread than an opium den. Verdict: delicious.

Amouage Fate: Fate wasn't Angie's thing. She memorably called it a Big Hot Powder Monster. A fair assessment, but I could probably dust my cleavage with the right ras el hanout, so Fate is my favorite from the brand since the relaunch of Ubar in 2009. Of the listed notes, I get mostly cinnamon, chili, narcissus, green rose, labdanum and frankincense. Fate is fresher and softer than these notes imply, though, and while a still warm perfume, there is that touch of cold incense ash that some of the recent Amouages have. Very pretty, and as pricey as all get-out.

Imaginary Authors Cape Heartache: I'd never thought to pine (ha!) for a strawberry and fir fragrance, but here it is, a perfect little puzzle of sweetness and evergreen resined together by Josh Meyer, who is apparently quite smart.

Serge Lutens Vetiver Oriental: Like Cape Heartache, this is a strange one, a velvety vetiver as gourmand. The usual forest and licorice facets of the root are set against iris, chocolate and sandalwood, making for an unusually earthy take on an oriental.

Cartier L'Heure Vertueuse III: In 2012, it seemed odd that Cartier would plan a December release for the third hour in their Les Heures de Parfum series. This is an intensely green and aromatic fragrance, full of herbs and stems and lavender. But as Persolaise and Denyse at Grain de Musc have noted (here and here), there is something wonderfully reviving about Vertueuse in the winter. A brew to cure what ails you, and as the tenth addition to an expensive and crowded collection, it's often overlooked.

1. Along these lines, a verse riddle translated from the Old English, about the spectacle of winter, which I read last night: "The wave, over the wave, a weird thing I saw / Thorough-wrought, and wonderfully ornate:/ A wonder on the wave — water become bone." Any guesses?  It's ice (via Michael Alexander's translations of the Exeter Book.)

2. Interestingly, the 1997 relaunch advertisements for Norell featured Faye Dunaway, who was referenced (unwillingly, one imagines) as an inspiration for Ralph Lauren Notorious.

Note: top image is Winter is going away [cropped] by rapidfixer at flickr; some rights reserved.