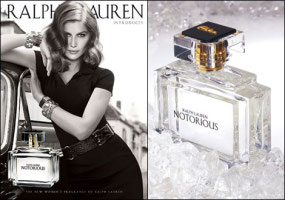 Notorious is the lastest feminine fragrance from Ralph Lauren, and it takes its cues from the "film noir classics of Alfred Hitchcock and other Hollywood greats":

Described as a “daring new fragrance of timeless intrigue and boundless desire”, Notorious was inspired by the sexy, mysterious, self-possessed women of the golden age of film glamour, such as Ingrid Bergman, Lauren Bacall and Faye Dunaway.*

The juice itself, by perfumer Olivier Gillotin, is classified as an oriental, and based on all the ad copy I was expecting something dark, maybe a bit edgy, maybe a bit femme fatale. Nope. Notorious reads more like a foody comfort scent, courtesy of the chocolate cosmos ("a decadent, chocolate-scented burgundy flower exclusive to Ralph Lauren Fragrances"; other notes include black currant, pink peppercorn, bergamot, white frost peonies, carnation, patchouli musk, vanilla and iris). You get the requisite fruits (along with the requisite pink pepper) in the opening, then indeterminate florals laid over a very soft cocoa and some warm musky woods. The finish is just slightly powdery.

It's sweet but I wouldn't call it overly so; it does not smell like it's geared towards 'tweens, and I have to emphasize again how soft the cocoa is. This is not a fragrance for a chocoholic, and I wouldn't call it candied in the least. In fact, it's surprisingly clean for something called Notorious — if someone ever comes up with "Fresh Cocoa Woods" dryer sheets, this would be about how they'd smell. I'd call it cushy-cozy-snuggly rather than sexy-glamorous-sophisticated, and there isn't even the slightest air of mystery or intrigue about it. It's hard to imagine Ingrid Bergman spritzing it on, and it certainly hasn't got enough attitude to suit Lauren Bacall (or even the model in the print ad).

Once the top notes wear off, it's an inobtrusive and undemanding scent, so much so that I don't really have a strong opinion about it either way. It doesn't appeal to me personally — I like a little more attitude myself — but I'd call it very wearable, and I'm sure it will find plenty of fans.

Ralph Lauren Notorious is available in 50 and 75 ml Eau de Parfum and in matching body products. It is exclusive to Bloomingdales through August.