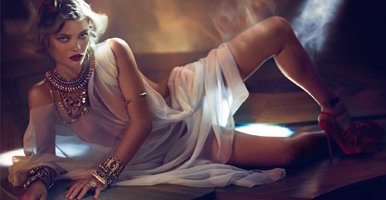 On first smelling Yves Saint Laurent Belle d'Opium, two words came to mind, and they weren't "must buy." No, they were "hairspray oriental." I like some of Opium's flankers — the lovely Fleur de Shanghai* is a treat on a summer's night. But rather than referring to Belle d'Opium as a flanker, YSL calls it the "next generation" of Opium. If that's the case, somebody please talk to Opium about birth control.

Perfumers Honorine Blanc and Alberto Morillas developed Belle d'Opium, giving it notes including Casablanca lily, sandalwood, gardenia, white pepper, jasmine, and narguile accord. After a generous spray of Belle d'Opium, I smell a hint of orange before gardenia takes over. The gardenia isn't the wet, tropical gardenia of Estée Lauder Private Collection Tuberose Gardenia or even Jovan Jungle Gardenia, but is a thin, synthetic flower coated in Aqua Net. A thread of tobacco and fruit run through the gardenia. The tiniest bit of jasmine hums along, too. Because of a little resin and amber, Belle d'Opium does smell like a high-pitched relative of Opium, but without Opium's drama and deep, clove-y spice.

Just when I thought I had Belle d'Opium pegged as a synthetic, screechy gardenia-based oriental, a thin, woody musk asserted itself. The fragrance began to reorient itself to what some perfume companies have been calling a "modern chypre," smelling more to me like bug spray than bergamot-oakmoss-patchouli-wood-labdanum of a real chypre. This foul accord has torpedoed too many department store launches over the past three years, and I hope it ends soon. For me, it's a one-way ticket to a migraine. I've read reviews of Belle d'Opium lamenting its lack of persistence, but on me it lasts a good four hours.

In an article in Elle magazine**, perfumer Calice Becker compares mainstream perfumes to formulaic romantic comedies. "With mass perfume, it's the same: We go for the stars that we know everyone likes." But the same article goes on to quote Vera Strubi, the former president of Thierry Mugler perfumes. About Angel's launch, she says, "That's when I realized that if you want a fragrance to be memorable, it can't please everybody." 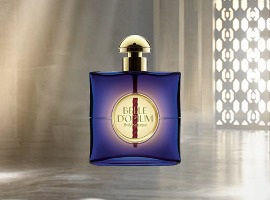 Opium took a bold stance over 30 years ago, and it still sells well, offending and delighting across the globe. Belle d'Opium, on the other hand, tries to be a romantic comedy, if with a vaguely oriental feel. I doubt Belle d'Opium will never win an Academy Award. Heck, I'd be surprised if it made it to Dancing With the Stars.

*If anyone at Yves Saint Laurent is reading, please bring back Fleur de Shanghai!