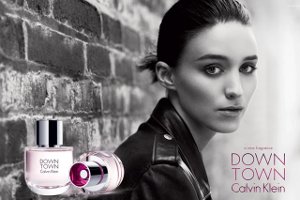 Downtown, the latest from Calvin Klein, is meant to "capture the essence of the confident woman." It's fronted by actress Rooney Mara, and it's geared young, although not as young as most: the target is reportedly women 25 to 35. Catherine Walsh of Coty explained the scent's marketing strategy thusly:

This group of consumers lives by its own rules. We’ve put together a superaspirational scent. Globally, consumers see downtown as a place they want to be. They identify it with youthfulness, edginess and cool.1

If you read yesterday's review, that probably sounds familiar. Young women who "see downtown as a place they want to be" is exactly the group that Elizabeth Arden Untold is chasing, albeit in a different way, or at least, Elizabeth Arden's idealized image of "downtown New York cool" sure doesn't look much like Calvin Klein's. Regardless, it's been an awful long time since Calvin Klein last managed to bottle youthfulness, edginess and cool — arguably, they haven't pulled that off since CK One in 1994.2 Downtown handily manages the youthfulness. Edgy and cool, maybe not so much.

Calvin Klein is calling Downtown a woody floral, and maybe it is, although the top notes are nearly candied enough to qualify for a more edible classification. The opening is a pile of sweet fruit, weakened slightly with an aquatic note (the notes: cedrat, bergamot, neroli, pear, watery plum, pink pepper, violet leaf, gardenia, cedarwood, incense, vetiver and velvet musks). Early on, a mild but persistent undertone of cotton candy keeps Downtown from stepping wholesale into pear shampoo territory, but it also keeps Downtown from smelling like anything you might imagine Rooney Mara, or indeed, anybody downtown, wearing with a black leather jacket.

The heart is the usual nondescript florals with the usual dollop of pink pepper. The base is pale and musky and soft. I would not go getting excited, either way, about the gardenia, or the cedar, or the incense, or the vetiver: "flowers" + "muted woods" + "velvet musks" pretty much covers what action takes place. It warms up with longer wear, and the sweetness does calm significantly, but Downtown is far too tame — it's awfully quiet after about an hour, and I found I had to apply it heavily to get any sense of the later dry down — to qualify as edgy, and it lacks the sultry vibe of the brand's last assault on this age cohort, Euphoria.3

Verdict: It's fine. If you'd told me Downtown was a modern designer fruity fragrance geared at a young audience, I'd think it had done its job perfectly adequately. Yes, it's too sweet for me, and no, it's not terribly interesting or unusual, much less superaspirational (really, isn't aspirational enough? do we need superaspirational?), but someone who likes sweet and who just wants to smell nice (and who finds Euphoria maybe too much of a presence) might find it just the ticket. Probably not perfumista-bait, though.

Poll: let your superaspirational side run wild — you look just like Rooney Mara, you're wearing the black leather jacket, you're downtown, doing cool and edgy downtown things.4 What fragrance are you wearing? Let's not make it too easy, so pick something that you can buy in a department store — no niche, no upscale Barneys or Saks exclusives! 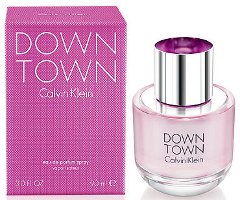 Calvin Klein Downtown is available in 30, 50 and 90 ml Eau de Parfum and in a 10 ml rollerball and 250 ml Body Mist, as well as in matching bath and body products.

2. In my humble opinion, the last time Calvin Klein managed even 'memorable' was with Euphoria in 2005.

4. Or you can check out the commercial for inspiration. Mostly, though, Rooney's day seems kind of dull to me — getting a coffee, listening to her iPod in the subway, taking a taxi. But she does dance in the street, cracks a few smiles, and holds some sort of superimportant press conference at the end.