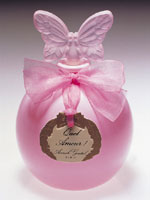 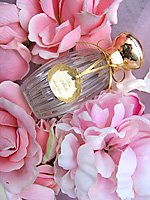 According to the lore of her eponymous fragrance house, Annick Goutal was deeply fond of roses; as one of the company websites states, "Every moment of her life was filled with them as she believed in their sensorial properties and their beneficial powers on the skin. She added drops of rose essence to her bathwater, drank it in secret teas..." Over the years, Goutal has released spicy fragrances, woody fragrances, green fragrances, and all sorts of florals, but it also continues to offer several variations on rose. Here are my thoughts on four of them...

Rose Absolue is an early Goutal fragrance, released in 1984. It was difficult to find for a while — in the United States, at least — but now it seems to be more widely available. Annick Goutal said of Rose Absolue, "Roses symbolize beauty, the eternal feminine. I wanted to dedicate a perfume to them which would also evoke this femininity." This fragrance is all rose: it contains essences of May rose, Turkish rose, Bulgarian rose, Damascus rose, Egyptian rose, and Moroccan rose. Rose Absolue is both delicate and radiant. Like a gradually opening rose, it shifts from dewy to velvety to slightly dusky. If someone asked me to recommend just a few high-quality rose soliflores, this would be on my list.

Ce Soir ou Jamais is Annick Goutal's "interpretation of a rose in a 'priest's garden' which she stumbled upon." It was the last fragrance that Goutal herself developed, working with perfumer Isabelle Doyen, and it is a composition of Turkish rose, ambrette seed, and "a blend of essences kept secret." Ce Soir ou Jamais drenches its rose with ambrette, a note that often reminds me of apple juice. There's something like lily of the valley in the heart, too, and then Ce Soir turns into a honeyed rose with a pale, ambery halo. The base of the fragrance has a slightly sour note, like damp flower stems. I also detect an accord that reminds me of champagne, and I happen to feel the same way about Ce Soir ou Jamais that I do about champagne: I want to love it. It never quite gels for me, but it does have some very devoted fans.

Quel Amour! was created in 2002 by Annick's daughter, Camille Goutal, in collaboration with Isabelle Doyen. It was one of the first fragrances I ever tried at the Annick Goutal counter, and it is still one of my favorite Goutals and one of my favorite spring fragrances. It was inspired by an occasion on which Camille's fiancé welcomed her home from a long trip by lining the stairs and hallway of her apartment building with peony and rose petals; its notes include  wild roses, rose geranium, pomegranate, blueberry, red currant, cherry, wine peach, and grey amber. I particularly enjoy the Eau de Parfum formulation, which offers a good balance of tartness and sweetness and lasts longer on my skin than many other Goutal fragrances do. Goutal recently released a limited edition Eau Parfumée of Quel Amour!, with less peony and more sparkling red currant, that would be perfect for summer.

Rose Splendide, a limited release from 2010 (and another Isabelle Doyen creation), includes centifolia rose, magnolia, pear, musk, and vanilla. The syrupy pear top note made me fear that Rose Splendide would turn out to be a big sister to best-seller Petite Chérie; fortunately (to my mind), the pear fades and the rest of the fragrance pairs its fresh rose with a longer-lasting leaves-and-grass note that could have been borrowed from Eau de Camille. The musk is very light and just a touch peppery, and the vanilla isn't noticeable. Rose Splendide is offered only as an Eau Parfumée. It took a while to grow on me, which is too bad, since it's a limited edition and it's reportedly nearly gone. If you're curious, you shouldn't wait too long to try it. Gather ye rosebuds... well, you know.

25 Rose Fragrances Every Perfumista Should Try