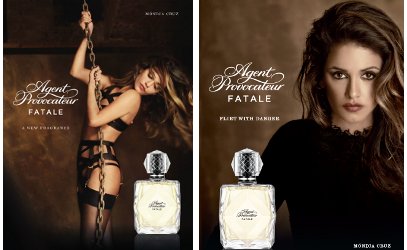 I'm a fan of several older Agent Provocateur perfumes, including the original Agent Provocateur and (my favorite) the floral-amber Maîtresse. I also found 2012's Pétale Noir very wearable and pleasant, not to mention its gorgeous packaging. The new packaging design for Fatale is the first difference you'll notice: instead of a curvy vessel like the ones used for the previous fragrances, Fatale is contained in a rectangular clear glass bottle with a clear plastic cap, both faceted to look like crystals. It resembles quite a few other perfume bottles out there. (On the other hand, I love the box, shown below, with its diamond-patterned, matte black background and its narrow pink border.)

Fatale is reportedly "inspired by the 1940s Hollywood femme fatale" who "will tempt you to discover her wondrous world of dark glamour," as well as the contemporary "successful career woman who works had and plays hard." To summarize the entire press release: seduction, allure, sensuality, mystery, confidence, desire — the whole she-bang. Again, nothing that we haven't seen or read before. All the same, I hoped that Fatale itself would transcend its package and its prose.

Does it? I'm afraid not. Fatale opens with a bold chocolate accord, and the fruit is there too — but the mango slices have been dipped in chocolate, the blackcurrants have been dipped in chocolate, and even the pink pepper is just a dusting over this fondue-like gathering of notes. I have to admit that this phase of Fatale is good mouth-watering fun. But the fragrance turns out to be front-loaded, with most of its emphasis on the top notes. While I was testing Fatale, I happened to read Erin's recent post about the "brief thrills" of enticing top notes that don't necessarily follow through on their promise, and I nodded in agreement. Fatale loses most of its glossy sweetness within an hour. What I'm left with is a dustier heart of powdered cocoa and some very subtle iris and white floral notes.

As the fruit notes gradually vanish and the soft florals mix with a quiet, creamy vanilla and the remnants of the fruit-and-chocolate fondue, Fatale morphs from a "fruitchouli" into a "fleurmand." There's nothing wrong with a mix of floral and gourmand notes — I have many favorites in this sub-category. However, Fatale just sort of dries up and dissolves, and it doesn't even last particularly long. It's a short-term seduction for me. If you're craving a mainstream dessert-ish floral with soft woods, you might want to try Lancôme La Vie est Belle, which is more smoothly constructed and has better longevity. (Or, you know, you could cut to the chase and revisit Angel or one of its lighter flankers, like Angel Eau Sucrée.) 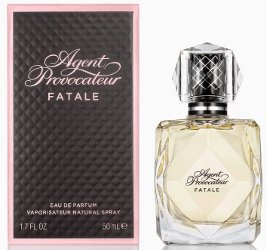 I actually do admire the Agent Provocateur lingerie collection, which manages to be elegantly risqué without crossing the fine line into trashiness. I thought the brand's earlier fragrances were apt reflections of that style. Fatale, I'm afraid, smells more like Victoria's Secret. Why release a fruity-floral-gourmand now, when everyone else has already done it, and when Agent's early fragrances were so much more distinctive? I'm sure there are valid business reasons that I (a pure aesthete where fragrance is concerned!) wouldn't quite understand. Fatale may turn out to be very popular and may introduce a new audience to Agent Provocateur. In the meantime, I might stock up on Maîtresse, just in case.