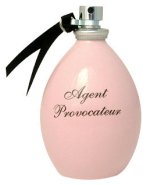 The top notes have a nicely dry chypre-ish feel, earthy and warm, with a beautiful buzz of spice. After that, it slowly turns rich, with a creamy floral sweetness centered on rose.  There is a bit of a dark, vaguely leathery animalic base, but it is softened by the flowers and a lightly powdered finish.

Agent Provocateur is often compared to Jean Couturier's Coriandre*, a fragrance that I wore for many years but have resisted re-visiting for fear that the reformulation will depress me. I can catch the comparison only briefly in the top notes, and then later only from a distance: up close, Agent Provocateur smells quite different from what I remember of Coriandre, which in my memory was more sparkling and green than rich and creamy. If I'm wrong, please don't tell me.

At any rate, I like Agent Provocateur better now than I did when I first tried it several years ago, but I don't entirely love it. I've worn it three times in the last week, and each time I enjoyed it very much for an hour or so, then the richness and the powder started to wear on me and I wished I was wearing something else. Perhaps I need to try it again in cooler weather.

Eau Emotionnelle, released by Agent Provocateur this year, is meant as a lighter variation on the original. I have yet to see a complete list of notes, but additions include cape snow bush, lie de vin, pink pepper, white tea and osmanthus. The opening is fresh and mildly fruity; the mid notes are fresh and mildly floral. Agent Provocateur calls Eau Emotionnelle the original's "charming sister", but they are not so closely related to my nose, or at least not until it has dried down and the similarities in the base notes are evident. Even then, most everything that made Agent Provocateur what it is has been smoothed out, toned down, and made acceptable for office wear: there is but a trace of the earthy warmth, buzz of spices and dark animalic undertones. This is lighter, blander, and much less sexy.

Like this year's Euphoria Blossom by Calvin Klein, Eau Emotionnelle strikes me as not particularly likely to please those who already love the original but want a lighter version. It just isn't the same sort of thing, and in that sense, and again like Euphoria Blossom, it might work to attract new consumers to the brand. Personally, I would have preferred a more straightforward rendering of Agent Provocateur in an Eau de Toilette.

* Update: I did revisit Coriandre after writing this article, and as I suspected, I would have been happier if I hadn't.