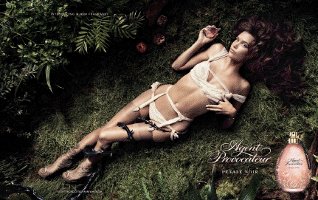 I'm definitely not someone who purchases fancy, expensive lingerie (and that is all you'll know, and all you need to know!), but I do like Agent Provocateur's fragrance line. It's a relatively small product range, and the fragrances all seem to be targeted at the over-25 demographic, two refreshing changes from the current norm. Maîtresse has been my favorite since it was released, although I also like and respect the original Agent Provocateur's saffron-rose chypre effect.

Now we have Pétale Noir, "a deep floral scent with a hint of oriental mystique" and top notes of mandarin, water lily, bergamot, violet leaves, hyacinth and magnolia; middle notes of rose otto, rose absolute, ylang ylang, muguet, orris, osmanthus, neroli, cassis blossom; and base notes of ginger, leather, sandalwood, vetiver, tobacco leaf, amber, musk and sandalwood. Agent Provocateur's description for this fragrance warns us that its "soft petals make way for dangerous prickly thorns." However, I experienced Pétale Noir's development in reverse: for me, it begins as a modern chypre, with dark rose framed by vetiver and patchouli. It's not a skanky-dirty rose, but it's more roughed-up than most florals you'll find at the average department store.

An hour or two later, Pétale Noir smells less "thorny" and more "petal"-like. The rose softens and is joined by creamy white florals that fall neatly midway between soapy and lush; the magnolia and muguet (lily of the valley) and some orange blossom seem particularly noticeable. There's also a nice dusting of spice, but nothing that tips into holiday potpourri territory. Petale Noir's dry down is a little more muted and less interesting than the earlier stages, but it's not bad: just a warm ambery-musky floral, neither deep not bright. And those potentially fruity-airy top notes of mandarin and water lily and so on? They're so discreetly tucked behind that floral-chypre opening that I barely notice them.

Pétale Noir's central and later phases remind me somehow of the fragrances I wore in the era of the late-1980s and early 1990s — not the heyday of designer knock-outs Poison and Obsession, but the slightly later moment when sophisticated-yet-wearable feminine florals were much easier to find than they are today. Despite the slightly flat dry down, Pétale Noir has good longevity, and I'd describe it as sexy in a not-trying-too-hard way.

Pétale Noir's "juice" is tinted pink, which I'll forgive in this case, especially since the rest of the packaging is so pretty. The bottle is Agent Provocateur's usual sensual shape (it really does sit well in the palm of the hand), and it's decorated with delicate white roses and golden thorns and ornamented with a teensy black chain. All in all, perfect for a dressing table or a boudoir! Agent Provocateur, once again, knows its audience well.