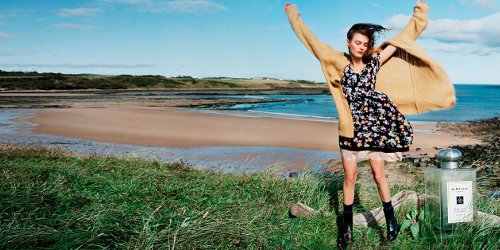 Wood Sage & Sea Salt, the latest release from Jo Malone, has just begun to appear in stores. It's a fragrance inspired by the salt air, sea grasses and rocky cliffs of the English coast, developed by perfumer Christine Nagel; its official notes include ambrette seeds, sea salt, sage, grapefruit and red algae. In a recent interview about this fragrance, Nagel also mentioned buchu leaves, plum, dried fruits, driftwood and musk as compositional elements.

Jo Malone has been hit-or-miss for me over the past year or two; I liked Peony & Blush Suede, but I wasn't crazy about Silk Blossom, and I found the London Rain trio too dull even to think much about, much less review. Still, Wood Sage & Sea Salt sounded appealing, so I gratefully took the sample that was offered to me at a Malone counter in a department store. It turns out to be one of the recent releases that I enjoy, and it feels just right for the final weeks of summer.

I'm not going anywhere for late August, but if I were, I'd want to go somewhere that smelled like this fragrance. It's primarily a mix of air, mineral and wood notes that turns into something of a skin scent; the only thing I dislike about it is its short staying power (since, as usual for Jo Malone, it's a cologne concentration). The fruity top note smells (to me) like bergamot as well as grapefruit. It's followed by a musky-sweet ambrette and a subtle salt-spray note. If you enjoy certain marine-air notes but you dislike the suntan-oil accords and melon-y Calone that often accompany beach-air notes in perfumes, you might enjoy this alternative. Wood Sage & Sea Salt has a very quiet plum-berry note buried in its heart, and some discreet dry woods. The dry down is still salty, but warmer than the earlier phases. (As for the wood sage? — I don't detect sage or any other herbal note, which is a little confusing. I forgot all about it when I was actually wearing this fragrance.)

There's nothing daring about Wood Sage & Sea Salt, but it's a well-made, low-key, "natural"-feeling fragrance that perfectly suits a summer-into-fall mood. If it had better longevity, I'd consider buying a small bottle. Although I usually consider Jo Malone a more "feminine" house, I think this scent would work just as well for men as for women. And, although I typically ignore Jo Malone's "combining" prescriptions, it just occurred to me that Wood Sage & Sea Salt would layer nicely with Blackberry & Bay. Lastly, it's reportedly Christine Nagel's final fragrance for Jo Malone; I'll be curious to see what happens next for the brand.

Jo Malone Wood Sage & Sea Salt will be available in 30 ($60) and 100 ml ($120) Cologne. A matching Body Creme ($75) is also available. (I wish they would offer a candle!)1 For purchasing information, see the listing for Jo Malone under Perfume Houses.

1. Ed. note: there is a candle (and a body/hand wash) on offer in the UK but not as of this moment in the US.