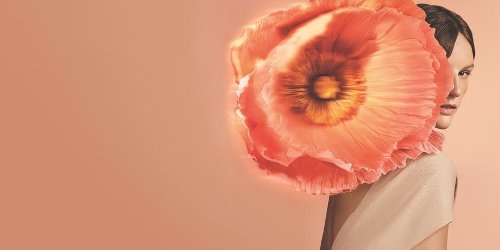 When I read the press release for a new fragrance, I can't help but imagine how it will smell. I know that the list of notes and the promotional copy need to be taken with a healthy dose of skepticism. All the same, I have fun guessing what the actual experience of the fragrance will be. This week I tried two new-ish scents and neither of them was quite what I'd expected.

First: Gia, the newest fragrance from Tocca, "expresses passion and is given flight by notes of feminine power and purity" in its composition of Turkish rose, pink peppercorn, tangerine, amber and sandalwood. When Gia was first announced, its press release mentioned the artist Georgia O'Keeffe as its inspiration. As I said then, I've spent many years reading and thinking about O'Keeffe and about perfume, and I don't see the connection. O'Keeffe was not known to wear fragrance (on the contrary!) and she's not particularly associated with roses.

Setting aside that dubious O'Keeffe shout-out (as Tocca seems to have done for its website), I approached Gia expecting a mainstream fruity-rose fragrance. Is it? Not quite. It starts off as a fabulously fake red rose fragrance, with hints of strawberry and vanilla, à la Lush Rose Jam. I'm actually happy that it's more full-bodied and less citrusy than I'd predicted. 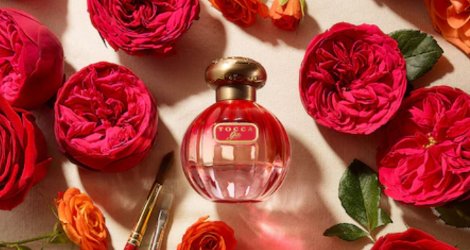 Then something odd happens: I keep picking up a marine "sea air" note weaving in and out of Gia's roses. It's almost as though some perfumer, suddenly fearing that their creation needed to be "more fresh" or "less perfume-y," hastily added some Calone late in the fragrance's development. Fortunately, this effect dies out after an hour or so. Gia's dry down is a perfume-y rose with a cushy vanilla and amber base. This fragrance happens to cost a lot less than Bond no. 9 West Side or Sana Jardin Tiger By Her Side, so if you're looking for a "fleurmand" rose and you can wait out an indecisive marine note, Gia might be worth a try. Like Tocca Maya, it's not groundbreaking but it's fun.

I didn't have a chance to try Poppy & Barley when the English Fields quintet was launched; it was sold out by the time I visited my local Jo Malone counter. (I did like Oat & Cornflowers, although it smelled suspiciously familiar.) Poppy & Barley is nowhere near as "vibrant" and floral-forward as its description and visuals suggest. Its blackcurrant is muted rather than tart or tangy, like dried fruit instead of fresh berries. If there's any violet in the fragrance, this is where it's blended in. I'm noticing a soft but distinctive vetiver note as well; overall, Poppy & Barley is earthier and woodier than I anticipated.

Poppy & Barley's dry down isn't floral at all: it's a creamy-nutty sandalwood that evokes grain (or grain-derived foods) and it's surprisingly long-lasting for a Jo Malone cologne. It's also more shared-gender than I would have guessed. I liked catching calming whiffs of it on my wrists and cuffs throughout the afternoon. Poppy & Barley isn't as substantial as, say, Parfumere Generale Praliné de Santal but, again, it's more affordable and easier to find. Could this be one of my new favorites from Jo Malone? Another surprise! 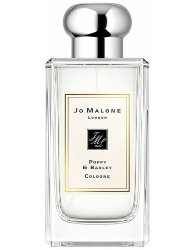