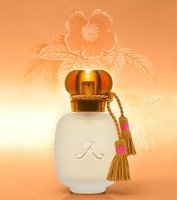 I had to raise an eyebrow at the most recent issue of Allure magazine, which featured an article discussing "the return of the rose" in contemporary fragrance. I didn't realize the rose had gone anywhere, since I've been wearing rose-inspired perfumes most of my adult life. Furthermore, Les Parfums de Rosine has been offering rose-centered fragrances since the company was revived in 1991, so they would seem to have been ahead of this trend (?); when I first began exploring niche perfumery a decade ago, I found many scents to love in the Rosine collection. (I would have liked to include more of them in my list of 25 must-try rose fragrances, believe me; I was just trying to keep things balanced!)

Majalis is the latest launch from Les Parfums de Rosine, a "seductive and sophisticated" floriental with top notes of bergamot, mandarin, grapefruit, nutmeg, and cinnamon bark; heart notes of cinnamon leaves, taif rose, tea rose, rose absolute, jasmine, black and red pepper, and coriander seed; and base notes of vetiver, sandalwood, cedarwood, amber, and musk. It was developed by François Robert for Marie-Hélène Rogeon, and it pays tribute to rosa majalis, also known as the "cinnamon rose."

I don't particularly enjoy strong doses of cinnamon, either in my food or in my fragrances, so I was pleased to discover that cinnamon makes less of an impression in Majalis than you might expect. That's the good news. The less positive news is that nothing else really seems to make a strong impression, either. Majalis's opening is something of a mish-mash of spice (really more nutmeg than cinnamon, to my nose), something plasticky-sweet like ylang ylang, and a green, vegetal note like cilantro. There's a pleasing saffron note, and much less citrus than I would have expected, going by the list of notes, but that's fine with me — there are already enough citrus-rose fragrances on the market, thanks to the success of our old friend Stella by Stella McCartney (which I still do enjoy, actually).

I prefer the heart of Majalis, when the more discordant top notes fade and a soft, dusky rose emerges. I also like the gentle sandalwood and cedar of the base. It's a very pleasant fragrance,  once it develops a bit. Strangely, it doesn't last very long on the skin; I applied it just before I sat down to watch a movie on television, and I was left with very little scent by the time the film ended. Majalis just doesn't have the presence or personality of my favorites from Rosine. Secrets de Rose, for example, is a richer, more rounded composition of rose and spice and amber, while Poussière de Rose combines rose and cedar in a much more memorable way. As for spice, Rosine has already released Rose de Feu, Rose Kashmirie, and others. I'm not sure whether Majalis really adds anything new to the collection. I wish I liked it more; fortunately, there are still many other noteworthy fragrances in the Rosine collection, and plenty of other spiced-rose fragrances on the market. Feel free to name your own favorites in the comments section!