Summer is winding down, but it's never too late to find your perfect neroli, right? Here are two reasonably priced options, both released earlier this year, or as always, name your own favorite in the comments. 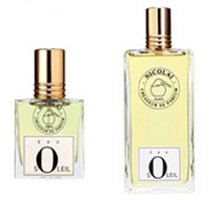 My high hopes for Eau sOleil stemmed not just from the fact that I love the Parfums de Nicolaï brand, but also from the amazing number of my summer favorites they've made, from Balle de Match to Eau d’Été to Eau Exotique to L’Eau à la Folie to Vie de Chateau. This is a brand that knows how to do light and refreshing without dumbing down. Add to that Eau sOleil's focus on neroli — it was said to be “almost pure neroli” — and I'm on board.

And the opening is fabulous: a dry but sparkling burst of citrus with mossy and herbal undertones, reminiscent of a classic Eau de Cologne. Alas, after that, it is mostly nice but no cigar, or at least, not for me: it's a relatively tame and somewhat flat blend of floral notes over a pale woody-musky base. It's summer-y and pleasant, and the ylang ylang lends a bit of a tropical vibe, but it's not as lively as I'd hoped, and it's nowhere near as lively as any of the fragrances from Nicolaï that I mentioned in the last paragraph. I wore it next to Atelier Cologne's Grand Neroli, a scent I bought but have not reached for as often as I thought I would — it could be a bit livelier too — and I far preferred the Atelier.

Still, fans of the house should give it a try. It's absolutely unisex to my nose, in fact, the person I might recommend it to is the person who was interested in Diptyque's take on ylang, Eau Moheli, but found it too feminine. Like Victoria at Bois de Jasmin (you can see her review here) I would prefer Nicolaï's Cologne Sologne for neroli, although I don't personally adore Cologne Sologne either, and I will say that sOleil has far greater staying power. 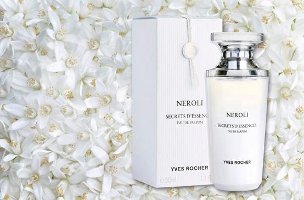 Néroli is the latest addition to Yves Rocher's Secrets d’Essences collection (see Voile d’Ambre, Rose Absolue, Iris Noir, Tendre Jasmin, Vanille Noire). Many perfumistas have been pleasantly surprised by the quality to be found in the series: they're generally very well done for the price, and, extra bonus, they can be found in very small sizes for a song. Generally speaking, they smell like fragrances that cost far more.

Néroli is lighter and more summer-y than many of the other fragrances in the collection. It's a clean blend of orange blossom and neroli, and almost certainly other floral notes as well. It's not quite bitter, not quite sweet, and has a touch of green. It's mostly linear once the top notes fade, and the base is pale and musky, with a slightly resinous undertone.

It's pleasant, and the lasting power is reasonable if not stellar. The smaller sizes are a bargain — I don't think anyone would complain about the $5 or $12 you would spend to get one of the two smaller bottles (see below). That said, I don't think anyone will smell it and marvel that it can be had at bargain prices, either. I wore it next to the Nicolaï and the Atelier Grand Neroli, and again, the Atelier was the best of the bunch. The Yves Rocher smells a little more like a classic neroli than the sOleil, but it's cleaner and blander than I'd like, and I wouldn't call it lively either. The Nicolaï is the more interesting of the two fragrances, even if it isn't the neroli I was looking for.

Yves Rocher Néroli was developed by perfumer Véronique Nyberg; the notes feature mandarin, petitgrain, neroli, orange blossom and musk. It is available in 5 ml mini ($5), 15 ml purse spray ($12), 30 (€36, not in US at the moment) and 50 (currently on sale for $38) ml Eau de Parfum. Yves Rocher has frequent sales, so you rarely have to pay full price for anything.

If you're looking for a lively neroli and you're willing to pay a bit more, you might try Czech & Speak Neroli, or the bright and cheerful L’Eau de Neroli by Diptyque. I am not a huge fan of the Tom Ford Neroli Portofino, but it's probably worth a shot too.

See also: this nice video from Lush showing the production of neroli oil. It nicely explains the difference between neroli (steam distilled) and orange blossom absolute (usually extracted with solvents).