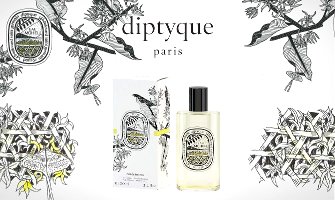 Eau Moheli is this summer's entry from French niche line Diptyque; it joins Eau Rose in their Les Florales collection. The name comes from Mohéli, one of the three Comores islands, and it's "about" ylang ylang, or as Diptyque puts it, Eau Moheli "approaches the scent of this exotic flower from another point of view, capturing the journey from its remote island home in the Indian Ocean".

If you've kept up with Diptyque's recent releases, from 2005's Do Son on through to last year's Volutes,1 you were presumably already prepared not to expect anything heady, much less a traditional exotic floral, and in that sense, Moheli delivers: after a brief punch of ylang ylang and citrus and fruit and peppery ginger in the opening, it calms into something closer to the house's modern sheer style, and into something that you might not immediately think of as primarily a ylang ylang perfume at all.

The dry down does stay floral — a man could wear it, but it's closer to Eau Rose than Volutes; some men might find Eau Moheli too far into floral territory to be a comfortable wear. The base notes (patchouli, vetiver, benzoin, tonka bean and incense) are kept mostly pale and quiet, and after the first twenty minutes, it's quiet enough to qualify as office-friendly. It is lightly sweet, and the later stages have a nice warmth, almost like sun-warmed skin, and just enough spice to keep things interesting.

Verdict: Mixed. I've complained, several times over, about the lack of heft and personality in Diptyque's modern fragrances; really, Volutes is the only post-2005 fragrance that made my buy list. I like Eau Moheli better than most of the others, and I'd wear it happily if I had some, but I don't adore it so much that I'm dying to own it, and my absolute favorite part was the whoosh of the opening. Perhaps more tellingly, I was less interested in it every time I wore it. 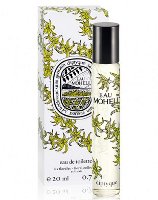 Diptyque Eau Moheli was developed by perfumer Olivier Pescheux; it is available in 100 ml Eau de Toilette and 20 ml roll on. I do miss the old style bottles, but the design on the smaller roll on is particularly lovely.

1. I'm not including this year's L’Eau du Trente-Quatre since it was really just a variation on the older 34 Boulevard Saint Germain.