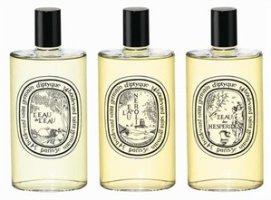 This year marks the 40th anniversary of Diptyque's first fragrance, L'Eau, originally introduced in 1968. To celebrate, the line has launched a trio of unisex colognes: L'Eau de L'Eau, L'Eau des Hesperides and L'Eau de Neroli. All three were developed by perfumer Olivier Pescheux.

L’Eau de L’Eau pays homage to L'Eau (go ahead, translate that in your head), which was said, in turn, to have been based on a 16th century potpourri recipe. I haven't tried L'Eau in some years; my testing notes, probably written in late 2003 or early 2004, say "it is warm and spicy but sheer at the same time: an almost aqueous feeling: potpourri under water. Very nice, would absolutely never wear it." My tastes have expanded pretty dramatically since then, so perhaps L'Eau would be more to my liking now, who knows? I like L'Eau de L'Eau just fine. It too could qualify as potpourri under water; after a nice burst of citrus, it's likewise warm and spicy but sheer at the same time. As Marina has already pointed out on Perfume Smellin' Things, it gets darker the longer it is on skin, and while it never gets heavy (if memory serves, it is much lighter on the cinnamon and clove than the original L'Eau), I'm not sure but that it might wear better in spring and fall than in high summer. Very nicely done, and the lasting power is excellent. The notes for L'Eau de L'Eau: clove, cinnamon, ginger, pink peppercorns, geranium, lavender, orange blossom, Benzoin balm, tonka bean and patchouli.

L’Eau des Hesperides starts with a wonderful burst of dry orange (the notes: bitter orange, mandarin, lemon, petitgrain, red thyme, rosemary, mint, cedar, white musk). As it develops, the orange is joined by a generous handful of chopped herbs. This could be the lighter, fresher (and drier) homage to Diptyque Oyédo, and on a spring day like today, I can't imagine why I'd want such a thing, but I've only to read my own review of Oyédo to remember that in the heat of summer, Oyédo's fizzy sweetness can be a bit much. L’Eau des Hesperides does have a nice bite, and is very much worth a try, especially if you found Oyédo more than you were willing to take on even in cooler weather.

L’Eau de Neroli is the "classic cologne" entry in the trio (notes: bergamot, petitgrain, verbena, tarragon, neroli, orange blossom, geranium, beeswax, white musk and cedar). It is a sunny and cheerful citrus, very bright, very wearable, with first the tarragon, and later the beeswax, adding some interest. If I can't think of much to say about it, it is only because a sunny and cheerful citrus is not so very hard to find, but if you're in the market for a summer cologne, this one is worth a shot. For my money, I like a hefty dose of oakmoss in my summer cologne so I'll stick with my Eau de Guerlain until they get around to de-oakmoss-ing it, assuming they haven't already done so.

I wasn't particularly excited when I first heard about this trio, but they've done a lovely job, and the packaging, as always with Diptyque, is superb. I wish they'd done a little coffret like this one, but ah well. I'd also be happier if I hadn't recently heard the rumors that Diptyque is axing a rather substantial proportion of their more interesting fragrances (reportedly L'Eau Trois, Virgilio, L’Autre, Eau d’Elide, and Opôné are all goners) — if it turns out to be true, then somehow this trio doesn't seem to have enough "weight" to make up for the loss.