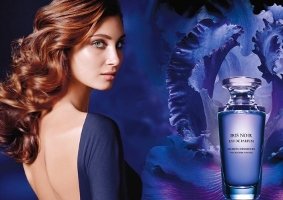 Maybe more than any other flower used in perfumery, iris is a chameleon. In Chanel No. 19 or Hermès Hiris, iris is as elegant as a beautifully dressed woman in a Mercedes sedan you admire from your seat in the bus. In Le Labo Iris 39, iris is as earthy and inviting as a rundown house with a wild garden and The Decemberists playing in the background. In Serge Lutens Iris Silver Mist or Prada Infusion d'Iris, iris is intellectual and absorbing. Annick Goutal Heure Exquise and Guerlain L'Heure Bleue feature moody iris, and Frédéric Malle Iris Poudre and Gianfranco Ferré Ferré are infused with iris that oozes dressing room glamour. Yves Rocher Iris Noir is Party Girl iris.

With so many perfume lines to explore, I never spent much time with Yves Rocher. Yves Rocher fell between the cracks of the high-end niche lines and fêted perfume houses that are so alluring and the drugstore fragrances with their bargain prices and reverse snob appeal. Yves Rocher is a reasonably priced French perfume line that embraces botanicals but is definitely commercial and probably won't be found at the neighborhood health food store any time soon.

Yves Rocher offers its highest end fragrances under the name Secrets d'Essences. Iris Noir is the third of the Secrets d'Essences releases, the first two being Voile d'Ambre and Rose Absolue (they've since added Tendre Jasmin). Olivier Pescheux and Nathalie Gracia Cetto created Iris Noir. It launched in France in 2007 and in the United States a year later. Described as a “floriental scent over an iris-chypre base”, Iris Noir has notes of bergamot, coriander, ambrette seed, iris, patchouli, and tonka bean.

Iris Noir opens with a pillowy waft of warm aldehydes that are brought down to earth with what smells to me like bergamot, mint, and black currants. Right away iris and a little rose join in, and the combination of fruit and iris reminds me more of iris flowers than of the rhizomes that are used for the iris note in fragrance. Iris Noir would be just another fruity floral if not for the coriander that adds a slightly dirty, personal note. The iris-currant-cardamom combination lasts right into the dry down of gentle patchouli and wood that borders on incense.

To me, Iris Noir smells like it could be a Guerlain department store release. In fact, it reminds me a lot of Guerlain Insolence. Insolence has less spice and smells more of violet and shampoo, but Iris Noir and Insolence share the same weight and feel and would both appeal to the woman looking forward to putting on her Jimmy Choos, grabbing a pink cocktail at a club downtown, and making a night of it. Only, while Insolence has her eye on the rookie stockbroker, Iris Noir is intrigued by the guy in the corner talking to the deejay. Of the two, I prefer Iris Noir.

Iris Noir comes in Eau de Parfum in 50 ml, a 10 ml purse size, and a 5 ml mini. It has medium sillage and good staying power. The 50 ml bottle of Iris Noir normally sells for $58, but last I checked it was offered for half off on the Yves Rocher website. A mini is $5.