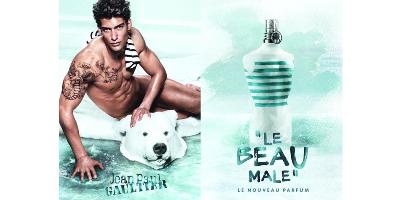 As the world warms up, an uncomfortable-looking, badly proportioned and PhotoShopped piece of sun-broiled beefcake (tattooed of course) contorts himself on a sheet of melting ice, using a threatened species’ hide as a cushion; welcome to the world of Le Beau Mâle*, Jean Paul Gaultier’s latest men’s fragrance. I would describe this “world” as ugly, dumb…not sexy. If you have about 20 minutes of your life to spare (waste), watch the annoying, disjointed, and, I assume, unintentionally, funny Le Beau Mâle promotional videos — talk about much ado about nothing! The Francis Kurkdjian interview is especially weird; he compares Le Beau Mâle to the comic book series Largo Winch; Lady Chatterley’s Lover; You Can Leave Your Hat On (the Joe Cocker song from 9½ Weeks); and A Streetcar Named Desire (Marlon Brando version). Succinctly put, my reaction to all this, the print ads, the videos, and the perfume, was: “WTF!”

Le Beau Mâle is billed as a fresher take (a mix of “hot” and “cold” notes) on original Le Mâle. Flankers come and go in the Le Mâle fragrance line and since I’m not a huge fan of the original perfume, I’ve paid them little attention (except for occasional sniffs if I see tester bottles at department stores). The Le Mâle flankers I have sampled have often been so closely related to Le Mâle that they are “worthless”…unless you want an army of slightly different Le Mâle torso bottles on your dresser.

Upon application, Le Beau Mâle smells like Le Mâle — but diluted with le mouthwash. From the start, Le Beau Mâle, so minty!, smells like “product” more than perfume (Le Mâle is luxurious in comparison). Le Beau Mâle’s lavender and wormwood are menthol-y, and Le Beau Mâle’s “bracing” accord, mint-lavender-wormwood, gives the perfume a sport fragrance character through mid-development. I don’t find, as Gaultier or Kurkdjian would have me believe, any “heat” or “ice” in this fragrance — Le Beau Mâle is lukewarm. Le Beau Mâle’s base is comprised of an oft-used men’s perfume formula: wan vanilla/tonka bean, FRESH “wood,” and light (white?) musk. As Le Beau Mâle develops it smells more and more like Le Mâle, but Le Mâle on a budget.

I keep thinking of Francis Kurkdjian in the Le Beau Mâle videos, being asked to describe the fragrance, and nervously spouting disparate cultural references — “baby, take off your shoes”…Brando!...“baby, take off your dress”…Lady Chatterley!... “yes, yes yes…” cartoons!…“you can leave your hat on….” Kurkdjian must be wondering how many more times he’ll be called into action by Jean Paul Gaultier to make something new out of something old. Hasn’t the Le Mâle franchise run its course?