Jean Paul Gaultier has just launched Le Mâle Terrible, a flanker to Le Mâle (released 15 years ago). Le Mâle Terrible’s ads still feature a “sailor” but the bottle now comes with a razor blade around its neck (the “terrible” aspect). Apart from the razor blade, there’s talk of “attack” and “overdose” in the PR materials, but given Le Mâle Terrible’s cocky,  super-clean, costumed model (hairier than his bald Le Mâle predecessor), one knows all this terrible stuff is tongue-in-cheek, not blade-in-neck (or nose).

Le Mâle Terrible goes on like a “tonic”…reviving, cooling; I smell grapefruit and peppery lavender, a touch of geranium leaf. Then, Le Mâle Terrible turns all smooth and creamy with coumarin, ghostly orange blossom (or a “white” floral), and rich vanilla/tonka and vetiver notes. In the extreme dry down, residual grapefruit, vetiver and cedar meld and create a slightly “sweat-y” accord — one has to get close to skin to detect it.

Anyone who’s worn classic Le Mâle will recognize Le Mâle Terrible immediately as a close relative; I’m not sure what makes this new version “terrible” — to me, it smells almost the same as Le Mâle, but better: less harsh, more “lush,” smoother, streamlined. Le Mâle Terrible is sweet, verging on gourmand (all that vanilla); it’s strong, but not obnoxious or overwhelming like original Le Mâle can be. 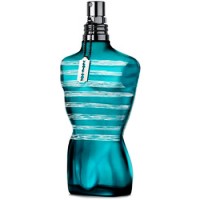 Le Mâle Terrible, like Le Mâle, makes me think of a well-groomed (freshly scrubbed, shampooed and moisturized) man, who is a lover of salons (we’re not talking literary salons). Anyone who’s been thinking of getting their first bottle of Le Mâle, or restocking their perfume cabinet with Le Mâle, should smell Le Mâle Terrible first; it deserves some attention.