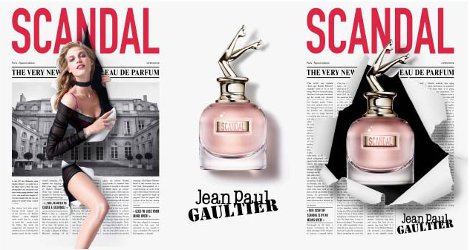 The basics: Scandal is the latest from Jean Paul Gaultier, and it purports to be a honey chypre combining an 'elegant aura' with the 'spirit of Pigalle', and reflecting the designer's "vision and feeling about femininity".1 It's the brand's first pillar under licensing arrangements with Puig.

The backstory: Like many feminine fragrances on the market, Scandal purports to reflect the dichotomy in the lives of women — they might want to do responsible things during the day, like hold down jobs and whatnot, and then feel sexy at night. Quelle surprise, right? In this case, Scandal tells the story of Madame La Ministre, who stays out all night partying, gets into her limo, cuts off her evening clothes with scissors, scooches into her business wear, and then steps out of the car at work, where the press is already waiting for her. Am I crazy, or is this story line maybe a wee bit quaint? Does anyone find it scandalous, in 2017, that young women with important jobs might not stay at home knitting in the evenings? Does anyone see a woman out partying at night and assume she does not do anything productive and meaningful with her days? Has time stood still for Gaultier — is he still trying to subvert the same 'bourgeois ideal of femininity' that he nudged with Fragile and Classique? The biggest scandal depicted in the advertising, to my mind, was the gratuitous destruction of the party dress — has Madame Le Ministre not heard about the scourge of fast fashion? (And I do hope she'll find time to fit in a nap and a nice sandwich.)

The juice: Scandal was developed by perfumer Daphné Bugey. The notes include blood orange, grapefruit, gardenia, honey and patchouli. It fits into the story line because it's "very daytime with gardenia and blood orange, and also has a very night side with honey mixed with patchouli".2 (Most unfortunately, there is only one spray nozzle, and I could not figure out how to make it stop shooting out all 24 hours at once.)

What it smells like: It goes on SWEET and LOUD, and it stays that way for the duration. There is an overload of honey, without, to my nose at least, the undertone of urine that sometimes creeps into honey fragrances. There is some bright but flat citrus in the opening and an awful lot of bubblegum-ish fruit. It's joined very quickly by a heavy floral note, sorta / kinda gardenia-ish, I guess, but also sorta / kinda just pinkish perfume flowers, lightly spiced. There is a darkish, woody amber base, mostly clean, with just the lightest dusting of a powder finish. It's not dark enough, or heavy enough on the patchouli, to qualify Scandal for fruitchouli status, and there's likewise plenty of vanilla but it's not creamy enough to qualify as a comfort scent. I wouldn't quite call it linear, but it's close; it has a modern, "no flowers died in the making of this perfume" feel. The lasting power is amazing.

My verdict: There is a sea of heavy and sweet fragrances out there already, and while Scandal did not remind me of any one of them in particular, it reminded me of all of them — that is, it smells very "on trend". I like some unoriginal sweet perfumes myself, but it's not my favorite category and I found Scandal annoying to wear: it just feels clunky to me, for lack of a better term. I felt a mild dislike on the first wearing; by the third outing, I pretty much hated it. If you're a fan of the genre, do give it a shot. I'd say the reviews are mixed, but it has certainly found fans. 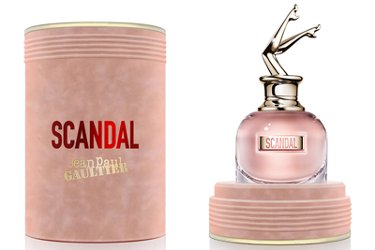 The details: Jean Paul Gaultier Scandal is sold in 30, 50 and 80 ml Eau de Parfum and in matching body products. It is on counters over the pond, but will not launch in the US until 2018.