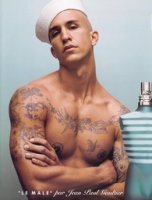 In 1995, a scented bomb was detonated and the effects of the bomb were felt around the globe. The ‘bomb’ was the release of Jean Paul Gaultier’s flowery, powdery, spicy, sweet and strong Le Mâle. Almost overnight, Le Mâle could be smelled in clubs and bars, in dormitories, gyms (yikes! fresh out of the bottle!), elevators, parks, taxis, airplanes, supermarkets, theatres, deserts and rainforests. I was happy for Gaultier’s success (and that his cologne was more audacious than most men’s fragrances), but since every other man was saturated with Le Mâle, I had no intention of wearing it.

Twelve years have passed since Le Mâle’s debut and I’m finally giving the fragrance a try. To prepare myself for the anointing, I read many online reviews of Le Mâle. I was surprised when I looked at posting dates to see Le Mâle was still being discussed; it was, and is, a bestseller.

A slew of Le Mâle reviews were by young men who said (over and over and over again): “the ladies love this stuff!” “girls go wild when I wear this” “I get so much action when I put on Le Mâle.” There were gay commentators who praised the man-attracting qualities of Le Mâle. Then there were the men who wrote they were afraid wearing Le Mâle sent the “wrong message” about their sexuality (“I ain’t gay!!”). There were closet cases, men who wore Le Mâle “in private” only. There were the snobs (like myself) who felt Le Mâle was just too popular to wear with a straight face.

The women who wrote reviews of Le Mâle, and who wore it themselves, also applauded the fragrance and their comments were, for the most part, free of sexual anxiety (they made no assumptions about Le Mâle wearers’ sexuality).

Almost all reviewers felt Le Mâle was one of the most powerful scents they had encountered and that a “light hand” was needed when it was applied or something akin to olfactory calamity would occur.

Bearing all this in mind, I sprayed on some Le Mâle for the first time.

In interviews, Gaultier has stressed the barbershop angle of Le Mâle but Gaultier also uses a muscled, tattooed, bare-chested “sailor” as the model for advertisements. When I got my first whiff of Le Mâle on my own body, I was reminded of my childhood barbershop; Le Mâle’s aromas of herbal wormwood and lavender, mint and orange blossom recall the scents of old-fashioned talcum powders, pomades and aftershaves. Le Mâle’s sailor is certainly not Popeye, nor is he a sailor of the raunchy wharf-rat type one finds in Jean Genet’s novel Querelle de Brest (or in Parfumerie Generale’s Querelle Eau de Parfum for that matter). Gaultier’s sailor is a marin-imitateur, a man who loves to dress up as a sailor, who is squeaky clean and perfumed, who is fresh from the barbershop after a shave (of his beard and his head) and who probably got his chest waxed while he was at it.

After a temperate application of Le Mâle, I smell mint and artemesia, then bergamot. The bergamot is industrial-strength and a tad harsh. Next up is the great combo of lavender and orange blossom; these two ingredients are in such a tight embrace it’s hard to distinguish one from the other but I feel orange blossom is being squeezed the tightest. Cumin is listed in Le Mâle’s ingredients but it must be in miniscule amounts, for I smell cardamom more than I do cumin and the cumin is very smooth. The base notes of Le Male are expertly blended and are sweet — but not cloying (which surprised me). I particularly like the dry vanilla-tonka bean finish. Near the last gasp of Le Mâle there is, yet again, a harsh chemical aroma but it quickly dissipates and leaves behind a “fruity”, almost apple-like, scent.

Le Mâle lasted on my skin all day and is certainly a unisex cologne.

Every now and then when I try a new fragrance I imagine who would wear it. When I smell Le Mâle, a woman, not a man, comes to mind and since this baroque diva is not alive to dispute my hunch, I’ll say this fragrance would have appealed to the famed ceramicist, Mama of Dada, and unashamed boy-chaser Beatrice Wood. And after wearing Le Mâle, a phrase of Wood’s came to mind: “I Shock Myself.” I was shocked — I actually liked Le Mâle.

Like many bloggers and perfume reviewers before me, I feel the secret to getting the best out of Le Mâle is by applying it sparingly. I can’t imagine anyone needing more than three sprays. In fact, one spray may be perfect for this if you dare wear it in hot weather. When applied heavily, Le Mâle becomes an obnoxious, gauche bully.

I like Le Mâle’s blue torso bottle but I like the brand new all-white torso bottle for Gaultier’s Fleur du Mâle even more. I’ll tackle that scent tomorrow, it’s new on the market and I do not plan on waiting 12 years to try it; I plan on being in the vanguard on this one.

Jean Paul Gaultier Le Mâle is available in 75 and 125 ml Eau de Toilette, and in a wide variety of bath & grooming products. It can be found at discount, but not at the bargain-basement prices of some of its designer fragrance compatriots.