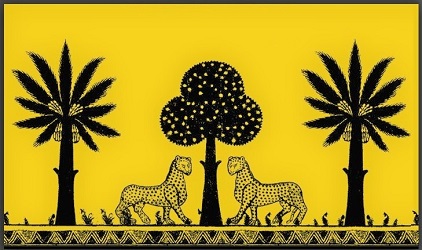 Two weeks ago there was a Meeting of the Noses in Portland, Oregon. After knowing each other via Now Smell This and emails for almost !12! years, Angela and I finally met face to face. (And I'm happy to report that Angie is as witty, kind and charming in person as she is in her writing. Okay, add a dash of lighthearted roguery, as well!) One other nose was involved in our meeting, too — raconteuse Tracy Tsefalas of the Portland perfume boutique Fumerie. I forgot how much fun it is to discuss the Perfume Industry with fellow travelers.

On the shelves of Fumerie, I was thrilled to discover some hard-to-find Ortigia products. Ortigia was founded by Sue Townsend of Crabtree & Evelyn fame. After selling that company and retiring to Sicily, she got bored and decided to start a new company. The name "Ortigia" has Greek origins and means "quail"; it's also the name of an island in Siracusa. Ortigia's logo of two leopards is taken from Byzantine mosaics inside the Palazzo dei Normanni in Palermo.

Townsend hired Lorenzo Villoresi to assist her in the creation of the scents for her Ortigia toiletries. Today, I'm reviewing Sandalo Eau de Parfum,* one of 12 Ortigia fragrances. 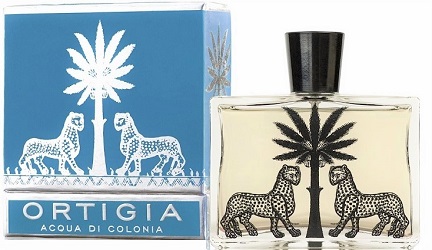 Sandalo opens with an interesting aroma: whiskey; then, dark, "oily" sandalwood comes to the fore and mixes with narcissus, vetiver and an airy teak scent. Cedar, wisely, is kept in the background so it won't compete with sandalwood. Sandalo's base smells of "narcissus-tinged" leather and dry, dusty sandalwood. Sandalo has a retro/dressy-casual vibe and immediately went on my to-buy list. If you ever smelled Crabtree & Evelyn Indian Sandalwood Cologne,1 you'll detect a resemblance in the sandalwood notes used in Sandalo, even though its additional notes are different.

Ortigia Sandalo Eau de Parfum is available in 30 ml ($65), 100 ml ($130), and a 10 ml roll-on ($24) — available in the US at Fumerie and Londons. Ortigia will ship to the U.S. from its Italian (Florence) headquarters: there's a €20 shipping fee but shipping is free on orders over €250; alas, if you order perfume, deemed a "dangerous substance" due to its alcohol content, shipping rises to €45 (no free shipping applies). If you live in Europe, your luck in finding the full range of Ortigia products greatly increases. 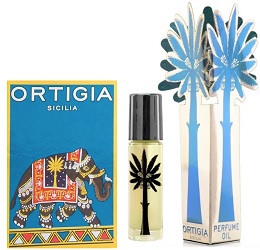