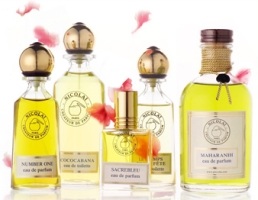 When it’s cold and rainy, often I want to wear a warm, ambery fragrance, maybe even something with the faint scent of stewed fruit. Sometimes I pull out a bottle of Guerlain Mitsouko or Parfums Micallef L’Automne. Or I might dab on some Rochas Femme parfum. Most of the time, though, I reach for my bottle of Parfums de Nicolaï Sacrebleu.

Sacrebleu is a spicy, fruity mélange with a thick body of buttery flowers and a warm incense drydown. The Parfums de Nicolaï website lists Sacrebleu’s topnotes as mandarin oil and red fruits; its heart as carnation, tuberose, jasmine, and cinnamon oil; and its base as frankincense, patchouli, sandalwood, peru balsam, and tonka bean absolute.

The first twenty minutes of wearing Sacrebleu I smell dusky apricots and cassis over a layer of what could be pâte sablée. A blend of spicy flowers keeps it from becoming too gourmand. After a few hours, Sacrebleu’s incense- and tonka-laden base takes center stage, and more than once as I’ve stood up from my desk or taken off my coat I’ve caught a whiff of Sacrebleu’s drydown and been surprised at how warm and easy it is.

Sacrebleu was released in 1993. According to an International Herald Tribune interview with Parfums de Nicolaï founder and house nose, Patricia de Nicolaï, Sacrebleu took two years to develop. "I wanted a grand perfume with an Oriental vanilla note," she said, "but not too heavy, obvious, or sickly. I had something very good, but too basic. I needed a top note to fuse the compositions and I had a lot of trouble." Perfumer François Robert suggested that she add fruit to give the perfume an interesting dimension. De Nicolaï adjusted Sacrebleu’s formula to contain a touch of raspberry, peach, apricot, and a fruity jasmine. The resulting fragrance was, she said, “the kind of star perfume that only happens once in 10 years.”

Early mentions of Sacrebleu’s name show it with an exclamation point, like L’Artisan Parfumeur Dzing!. At some point Parfums de Nicolaï seems to have dropped the punctuation. In French, “sacrebleu” is an exclamation akin to “holy smokes!” or “good heavens!” Patricia de Nicolaï is from the Guerlain family, and I’ve always wondered if Sacrebleu was a play on L’Heure Bleue, which it resembles a little. Sacrebleu’s incense base might contribute the “sacre” part of the mix. But where L’Heure Bleue is moody like the dusk it’s named for, Sacrebleu is a contented sunset. It’s a scent that’s closer to love than to sex and to comfort than to thrills. On a rainy December afternoon, love and comfort sound pretty good.