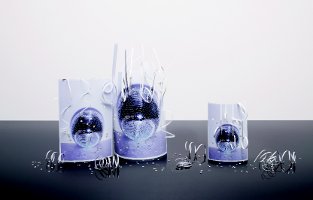 As you may have gathered from some of my past posts, I get touchy when arbitrary (or inaccurate) analogies are drawn between perfume and the visual arts. However, Olfactive Studio's collaboration between photographers and perfumers is specific and yet open-ended enough to leave breathing room for everyone involved. Each fragrance is inspired by a photograph and is given a term from the photographic arts. Lately I've been sampling Still Life, which was prompted by a photograph by Frédéric Lebain (above, cropped).

Lebain's still-life photograph shows an arrangement of three photographic prints of mirrored disco balls surrounded by a dusting of confetti. It contains images-within-an-image, and it could be a self-referential meditation on photography's two-dimensional representations of a three-dimensional world; it's playful and cerebral at the same time. Still Life, the fragrance, was developed by perfumer Dora Arnaud. It's a woody citrus with notes of yuzu, elemi, pink pepper, black pepper, Sichuan pepper, star anise, galbanum, dark rum, cedarwood and ambrox.

Olfactive Studio describes Still Life as "a surprising and luminous perfume that invites you to celebrate in style with a whirlwind of exotic cocktails." (I thought this would be an appropriate selection for the days leading up to New Year's Eve.) However, you don't need to worry that Still Life will turn out to be a pink-tinted concoction embellished with a sugar-dipped rim or a little paper umbrella: this cocktail is bright but sharp and austere, and it would be garnished only with a twist of citrus peel or a pod of star anise. It begins with a realistic note of tart yuzu fruit, something chilly and aromatic (almost like juniper, although that's not listed as a note) and a very sheer, fragrant resin. (I do like the transparent resin notes I've been noticing lately; Maison Francis Kurkdjian's Amyris is another example that comes to mind.)

Still Life's citrus top notes are nicely prolonged by its peppery heart and its woody base. Don't let the pink pepper scare you off; this is a sophisticated pepper blend that adds piquancy, as pepper should. The rum isn't really very "dark," and neither are the wood notes. They're warmed and softened by the ambery-musky ambroxan, so that your "cocktail" feels as though its being served up in a smoothly contoured, minimalist vessel of smoked glass. It could easily be worn by men or by women.

I've been enjoying Still Life for the same reasons I enjoy certain actual cocktails: it's refreshing and a bit warming at the same time, it goes down cleanly, and it brightens my mood. Come to think of it, there are a few cocktail-inspired fragrances in my rotation these days, many of them unisex: we've got Penhaligon's Juniper Sling, the relaunched Lubin Gin Fizz, and Frapin Speakeasy. I'm also thinking of Apothia Velvet Rope, which has a similar cool, astringent, liquor-like top note that I enjoyed when I tried it years ago. Still Life isn't quite as "me" as the more subtle milky-musky Lumière Blanche (which Victoria has already discussed to perfection on Bois de Jasmin), but I like having my sample around to cheer me up on these cloudy, deep-winter days. 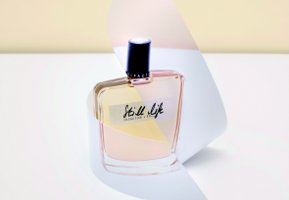