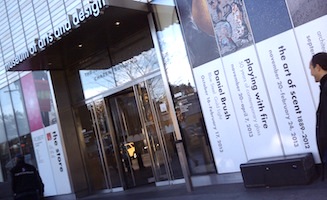 "The Art of Scent 1889-2012," the first exhibition organized by the Department of Olfactory Art at the Museum of Arts and Design in New York, opened to the public on November 20. According to the press release, this exhibition, curated by Chandler Burr, "examines major stylistic developments in the evolution and design of fragrance, and provides unprecedented insight into the creative visions and intricate processes of the artists responsible for crafting the featured works." I've attended the exhibition twice over the past few days, and my reactions are mixed and complicated; I'll try to summarize them here, along with a few photos I've taken. 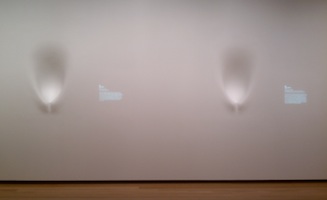 "The Art of Scent" is installed in the Museum's fourth-floor galleries, in a spare, neutral space created by the design firm Diller Scofidio + Renfro. The main gallery's matte white walls are punctuated by twelve curved recesses. From a distance, these niches resemble high-concept urinals or drinking fountains; upon closer inspection, they also suggest certain anatomical forms. Each recess houses a "scent machine" that releases a fine stream of fragranced air when its motion sensor is triggered. The accompanying "labels" are projections that fade in and out of view at timed intervals. (It's a slightly annoying effect if you're waiting for a text to appear or if it vanishes while you're reading it). 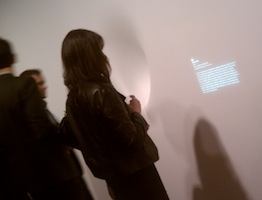 If you're a regular reader of Burr's work, you won't find many surprises on that list; he has written about most of these fragrances elsewhere and has included several of them in his "scent dinners." We could argue back and forth over the inclusion or exclusion of certain perfumes; in any case, a third of the twelve were created after 2000, and there's nothing from the 1930s, 1940s, or 1960s, and only one from the 1950s, L'Interdit (which has been reformulated more than once since 1957).

We could also spend a while debating the thorny issue of sponsorship. In the gallery, a wall text beside the elevator lists the exhibition's "Major Donors" and other financial supporters. Eleven of the twelve featured fragrances, by my count, have connections to the brands and laboratories that have financed the exhibition. Of course, only giant, multi-national companies would be able to supply the necessary materials for this kind of installation. It's the kind of Catch-22 situation that affects anyone who's planning an exhibition of work by living artists or designers and the institutions that represent them; all the same, the high level of donor involvement here made me a bit uneasy.

Instead, I'll try to focus on two other issues: the information we're given within the space of the show, and the information we aren't given. The labels for the older fragrances offer straightforward, if abbreviated, historical background with an emphasis on raw materials. The further we advance along the timeline, the vaguer the labels become: a fragrance "inspires a mixture of excitement and unease" or "seems at once everywhere and nowhere"; a perfumer "reconceptualize[s] the medium of scent." I understand the challenge of museum labels, which need to compress months or years of research into a hundred words — I've written more than a few such labels myself — but I wanted more from these texts. They felt oddly myopic to me. The label text for Light Blue, curiously enough, makes no mention of Dolce & Gabbana; the discussion of Osmanthe Yunnan does not refer to osmanthus or to Yunnan.

The "Art of Scent" press release makes the point that this exhibition showcases the fragrances themselves, "through the near-complete removal of visual indicators, such as logos and marketing materials, encouraging visitors to concentrate exclusively on the sense of smell." To me, the problem with focusing only on materials, technique, and technology is that the fragrances are divorced from the complex webs of commerce and fashion and social history and use that surround them. 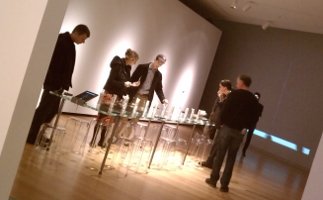 During both my visits, the second, smaller room of "The Art of Scent" seemed to be holding museum-goers' interest longer than the main gallery. This space is less didactic and more interactive. A long table is set with small glass bowls containing the fragrances in their usual liquid form, and visitors are encouraged to dip a paper blotter into a fragrance, then to select words to describe it from an iPad's touch-screen menu of nouns and adjectives. The accrued results for each fragrance are projected on the wall in "real time."

Along another wall of this gallery, we are introduced to the process of honing a fragrance's formula, through the participation of perfumer Sophia Grojsman: a row of five dispensers (again, disturbingly anatomical) offers cardboard squares scented with Lancôme Trésor in five stages of its development, each explained in a few lines by the Grojsman. And on the facing wall, a video monitor shows short interviews with four perfumers. I couldn't help noticing that, instead of dwelling on materials and techniques, every one of them spoke about the importance of smell — all kinds of smells — in their early memories and personal histories. This attitude seems strangely (but pleasantly) at odds with the somewhat antiseptic presentation of the first room. 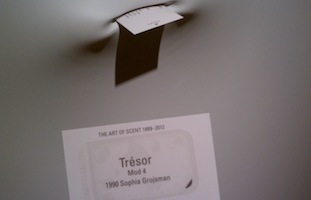 My mind also keeps coming back to the parallels that this project draws between the twelve fragrances and specific movements or schools in art history (see list above). I don't believe that we can necessarily draw direct analogies between art forms, even within the same decade. Various mediums of art and design don't march in lockstep. I could write a few hundred words more on the inaccuracies of describing L'Interdit as a work of Abstract Expressionism, or on the anachronistic use of the term Luminism (with a capital "L") to describe Osmanthe Yunnan. Why visual art, anyway? If we must have this kind of comparison, why not architecture, dance, literature? And doesn't fragrance have its own schools, its own traditions, waiting to be named?

But let's say we do adopt art historical methodologies to interpret fragrance: no work of art (visual or otherwise) is created in a vacuum. If I heard someone lecture about Fra Angelico's use of perspective in a Renaissance altarpiece without discussing the work's original setting, religious symbolism, or historically significant patron, I'd feel cheated of a full understanding of the object. If I lectured about the bravura brushwork in a John Singer Sargent portrait but never discussed the conventions of Western portraiture or the portrait's subjects and their way of living, my listeners would be left with unanswered questions. If a conservator bombarded me with the chemical names for pigments used in a specific painting, I'd need to know how they translate into blues, reds, and browns; the scientific terminology alone wouldn't hold much initial meaning for me.

When we see a brand name on a perfume bottle, we do bring preconceptions and associations to the fragrance inside, but that dynamic runs in more than one direction: the client has commissioned a fragrance that suits its overall image. When everything comes together as it should, there's a correlation between the fragrance and the surrounding aesthetic of the designer and/or brand, to say nothing of the cultural moment in which the fragrance was created. Can Angel really cast its full spell without the imagery of its star-shaped bottle and Mugler's futuristic, wasp-waisted glamazons? Can we consider L'Eau d'Issey without knowing something about Miyake's monochromatic garments, with their radically simplified yet versatile designs? What about the innovative jersey suits and little black dresses also sold by Chanel in the 1920s, to say nothing of women's changing societal roles during that era? And exactly why have "clean" and "fresh" fragrances been so popular over the past two decades? 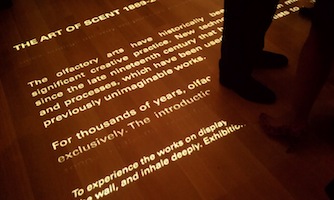 The actual exhibition of "The Art of Scent" isn't the end of the story: it will be accompanied by a catalogue packaged with small bottles of each fragrance (available for pre-sale, $250) and a series of lectures and workshops (most already sold-out). As a stand-alone event, however, the exhibition disappoints me somewhat. I love fragrance. I'm very fond of the Museum of Arts and Design. I'll look forward to learning about the Department of Olfactory Art's upcoming projects and — I hope — to seeing the art of fragrance presented in a wider range of interpretations.

"The Art of Scent 1889-2012" remains open through February 24, 2013. The Museum of Arts and Design is located at 2 Columbus Circle in New York; for more information, visit the museum website.

All photographs courtesy of the author. Bonus for anyone who has read this far: the man reading the label for Angel is rock legend Lou Reed, at the exhibition opening.