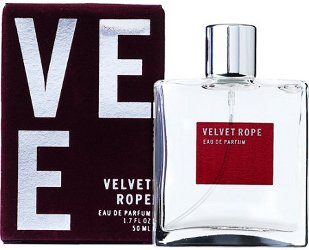 Velvet Rope is the second fragrance release from hip Los Angeles boutique Apothia. It follows cult favorite IF, which was launched in 2001. Velvet Rope was created by perfumer Rayda Vega.

Velvet Rope is a unisex fragrance, and was inspired by...

...A-list places where people are stimulated by watching and being watched..."We came up with a drink--an icy cold martini with a very dry vanilla bean stirred in," described Robinson. From there they created Velvet Rope. "There are essences of the vermouth and vodka in the fragrance. Then you take a twist of grapefruit for zest. And what else emulates these lounges and clubs is smoking. So we included a raw tobacco note very deep in the fragrance." (via Global Cosmetic Industry, 10/1/2005)

The notes for Velvet Rope are juniper berry, grapefruit zest, green rose, jasmine absolute, cypress leaves, vanilla absolute, white musk and patchouli. It starts out exactly as advertised: a martini with a big twist of grapefruit peel. It is very, very dry and rather high pitched; the pitch lowers as it settles and the grapefruit fades, but it stays dry and cold straight through to the end, with a bit of the gin lingering on. The florals are subtle, and there is something mildly fruity in the early dry down that mingles with the vanilla and a whirl of cigarette smoke.

Velvet Rope is that rare thing: a fragrance that smells just like its advance press says it will, and for that matter, that evokes exactly the atmosphere it claims to — the VIP lounge of a swanky Los Angeles nightclub. It smells young and hip and energetic, much more so than most fragrances targeted towards the young and hip and energetic. As I am none of those things, it is no surprise that it doesn't entirely suit me, but it is a fun, nicely composed fragrance and worth trying.

Velvet Rope is available in 50 ml bottles of Eau de Parfum or in body lotion, body wash, and matching candle. For purchasing information, see the listing for Apothia under Perfume Houses.