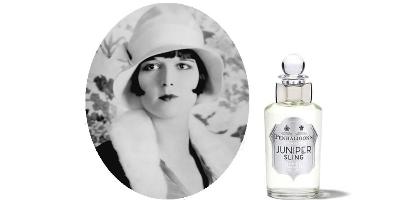 Penhaligon’s new Juniper Sling was “inspired by London Dry Gin and the gin-drinking Bright Young Things of the 1920s.” Nancy Mitford, Cecil Beaton and Evelyn Waugh were B.Y.T. in England, and let’s throw in some Americans, too: Louise Brooks, F. Scott Fitzgerald, and Louis Armstrong will do. How far we’ve dimmed — “our” bright young things include the Kardashian sisters, Justin Bieber, Prince Harry and Pippa (not to mention hoards of reality TV cringe-inducers). Much less depressing to talk about perfume!

Juniper Sling* does smell, upon first sniff, like a fragrant bottle of gin — there’s “booze,” citrus, angelica and vibrant cardamom (the opening is the best part of the fragrance). Under those head notes floats transparent iris and light-smooth leather. (During its opening and early mid-phase of development, Juniper Sling reminds me of Crown Perfumery’s discontinued Eau de Russe.)

After its energetic opening, Juniper Sling conks out. Juniper Sling’s base promises a mix of brown sugar, black cherry and amber — what a wonderful finish that could have been — but I detect only a second or two of cherry liqueur and some thin, slightly mentholated vetiver (mixed with anise?) Juniper Sling seems a perfume made to fill a pretty, retro bottle and to flesh out a vague idea of an interesting time and place: the Roaring Twenties in London.

Unlike a “percolating,” tasty cocktail that leaves one “buzzing,” Juniper Sling goes down quick and produces no lingering high; it wears like a cologne (it has mediocre lasting power and sillage). Juniper Sling Eau de Toilette is a simple, “refresher” scent, and at $110 for 50 ml or $140 for 100 ml it’s way overpriced.