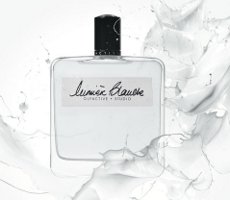 A mild and enveloping perfume, Lumière Blanche is a comforting cocoon, between milky mildness and cold spices. It evokes the sweltering heat from the sun at the zenith, which erases colors, leaving only a blinding white hue; it surprises with its spicy freshness. For its creator, “Lumière Blanche is a fragrance with beautifully contrasting hot and cold notes”; a whirlwind of light and freshness followed by milky mildness and a distinct, warm, and sensual end note.