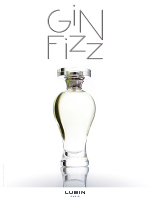 In 1955, a star captivated the crowds: appearing in films by Alfred Hitchcock and John Ford, playing alongside James Stewart and Cary Grant, Grace Kelly embodied the very elegance of America. Her mysterious charm even captured the heart of a Prince. It was in honour of her extraordinary beauty that Henri Giboulet created a perfume for Lubin which marked the decade, a very chic perfume, sparkling and fresh, evoking the cocktail in fashion that year in the 'American bars' of Paris, Gin Fizz.

Lubin Gin Fizz is available in 50 and 100 ml Eau de Toilette, and can be purchased now at Peony Melbourne in Australia or Premiere Avenue in France. (via peonymelbourne)