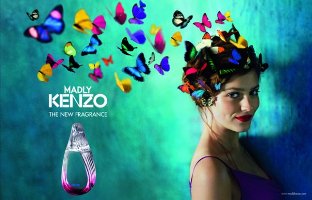 A woman's greatest quality is her touch of madness. — Madly Kenzo

Madly Kenzo sparked my interest when it launched last year — it has much in its favor, from the whimsical advertising to the wonderful Ron Arad bottle. And it was done by perfumer Aurelien Guichard, who also worked on Kenzo's UFO fragrance, a fun limited edition (and limited distribution) fragrance that was sold in a more complicated metal variation on the same bottle design. I hoped Madly might be a more commercial (and affordable) version of that scent; here is what I said about UFO back in 2009:

[It is] meant as “an interpretation of the scent of skin”...That, and the fact that Guichard apparently “delved into memories of his mother sculpting in marble, a contrast between the heat of the sculptor’s hands and the coolness of the material” is really all you need to know — as described, UFO is a transparent incense-y skin scent, slightly metallic in the top notes, later, more mineral-ish than metallic, with a light, slightly milky sweetness and an almost-velvety finish.

Nope. Guichard may have started there — Madly does share several notes with UFO — but the end result is different enough that UFO is a useful reference only insofar as it illustrates what might have been. Madly opens on strong orange blossom, powdery, peppery, milky-sweet (plenty of heliotrope and vanilla) and extremely fresh and clean. What was a transparent incense-y skin scent now smells like a bland but insistent dryer sheet, in the Fresh Flowers scent. It does improve (and lose some of the sweetness) as it calms, and the incense from UFO becomes more pronounced, but it never shakes the household-cleaning-products vibe, and on my skin, the woody musky dry down had faint but unpleasant undertones of something vaguely like plastic.

Verdict: an absolute no-go for me, and to my mind, almost comically at odds with its advertising. If you loved it (or if you've even smelled it), do comment! Note that I was testing the Eau de Parfum; the Eau de Toilette (see below) is advertised as a fruity floral but I have not tried it. 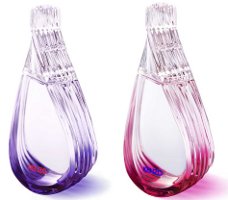 Madly Kenzo is available in Eau de Parfum (purple bottle; 30, 50 and 80 ml; floral oriental with notes of orange blossom, pink pepper, heliotrope, rose, frankincense, vanilla, cedar and musk) and Eau de Toilette (pink bottle; 30, 50 and 80 ml; fruity floral with notes of pear, litchi, heliotrope, jasmine, cedar and musk). Both versions appear to be widely available everywhere on earth except the US; so far as I know it has never officially launched here.