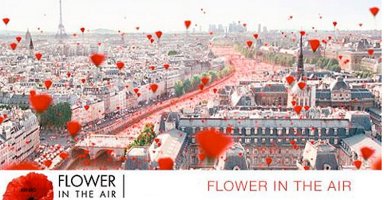 Kenzo launched Flower in 2000, and it has staying power: it's been a best seller for the brand ever since, and it's still on the list of the top 10 selling fragrances in France.1 No surprise, then, that Kenzo releases flankers on a fairly regular basis. I wasn't a huge fan of the original Flower; as I said in 100 Fragrances Every Perfumista Should Try, Flower was both wildly popular and just off-kilter enough to be interesting, but it isn't really my sort of thing. Some of the flankers I've liked more than the original (Flower Oriental) and some of them I've found interesting but also not entirely me (Winter Flowers), and some of them I've skipped altogether (most of the spring and summer variations).

Flower in the Air is the latest. Like the original Kenzo Flower, it was developed by perfumer Alberto Morillas. Unlike previous flankers, it sports a brand new bottle, and the design is great fun (see below) — the (scentless) red poppy that was reportedly the inspiration for Flower floats above the bottle on a clear lucite cap, and although it's hard to tell in the picture, the bottle has a slight teardrop shape.

As you might have guessed from the packaging, the scent is brand new as well. Instead of the stylized idea of a red poppy, we have Morillas' take on an "ideal rose"; he has described the composition also as an "exceptional ethereal flowery scent".2 And it is ethereal, at least, eventually. The start is sharp and loud, almost metallic, with very sweet berries and the usual pink pepper very much in evidence. I did not much care for it on paper. On skin, it settles quickly into a pretty floral blend of rose, gardenia and magnolia, a little lemon-y, a little green. It's all done in the modern style: think sheer and clean rather than deep and rich, all laid over a light woody musk base.

Verdict: It's well done and easy to wear, at least, once it dries down. It's clean, but not too clean, and it smells young but not so young that anybody couldn't wear it. The emphasis is on the "ideal" as much as on the rose, that is, it does smell like rose, but it's clearly not geared towards lovers of traditional rose perfumes; likewise, women who find traditional rose perfumes stuffy should not have a problem with Flower in the Air. It probably isn't quirky enough to attract hard core perfumistas, and I found it less interesting than Flower Oriental or Winter Flowers, and arguably less interesting than the original Flower. Still, it's a decent enough outing and given the added attraction of the packaging, and the as-always perfect Kenzo advertising, it will no doubt find an audience.

The lasting power is fine but it's pretty darned close to the skin after an hour or so — it probably wears more like an Eau de Toilette than an Eau de Parfum. 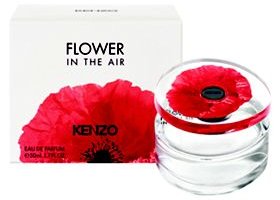