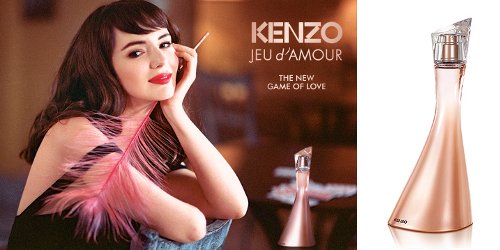 At one time, Kenzo was one of my favorite mainstream brands, but they're getting harder to find in the US, and lately I've liked a smaller percentage of what I'm able to find. Jeu d'Amour, which to my knowledge never officially launched here (do comment if I'm wrong!), sounded fun so I made a point of getting a sample. Nope, not fun. I expected Kenzo Amour with a bit of a twist provided by the pomegranate and tea, but Jeu d'Amour is mostly a soft but sweet floral, with some pink juice notes in the opening and no obvious olfactory link to the original Kenzo Amour. The once-fabulous Amour bottle looks cheaper than it used to (that change actually started with 2013's Amour My Love) and it smells like the same cost-cutting measures have been applied to the juice, which has dismal plastic undertones, and manages to smell flat and screechy all at once. With the usual apologies to any fans, it made me sad.

Lys Noir was reportedly resurrected from a 1924 Isabey fragrance, and if that information, combined perhaps with the Noir of the name, led you to expect a blockbuster sort of lily with the animalic bite of an old-school floral, think again: Lys Noir smells entirely modern. Mind you, it isn't as frail and clean as your typical modern mainstream fragrance — it can knock out Calvin Klein Beauty with one hand tied behind its back — but still, modern. Its full-bodied floral notes are softened into cream puff status by sweetish heliotrope powder, and it smells as much like (again, modern) tuberose and narcissus as it does like lily. My guess is that your average perfumista, smelling it blind, would not peg it as a lily fragrance. It's darkened by (clean) patchouli and woods, and it does get darker the longer it's on skin. To my mind, it's still too benign to earn the 'Noir' title, and I found it pleasant but not enthralling.