Kenzo's fragrance project known as Unidentified Fragrance Object (it's Parfum Objet Non Identifie in French — but we're going to call it UFO) is largely about the bottle: it was designed by Ron Arad, and was featured in retrospective exhibits at the Centre Pompidou in Paris and MOMA in New York (the MOMA show runs through 10/19). Kenzo asked Arad to come up with a "a vehicle for fragrance that breaks with traditional industry codes and evokes sensuality when in contact with the skin". The result, shown above, is made of zamac, a metal alloy, and can be cradled in the palm of the hand (it will not stand vertically).

I have not seen the bottle in person, but I love it in pictures and I love the whole idea of the project: most out-of-the-ordinary fragrance bottles emphasize bling rather than design, and let's face it, most of them cost a fortune. The $188 they're asking for UFO isn't peanuts, but you don't have to mortgage your children for it either. I think we've all agreed that $100 is the new free? So this is only $88 more than free. 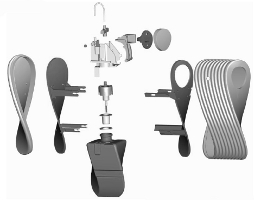 In addition to the bottle, you also get the juice: 40 ml of an Aurelien Guichard creation meant as "an interpretation of the scent of skin":

The perfume is not defined by the traditional olfactory pyramid of top, heart and base notes. Its structure is a balance between a powerful heart, “the marble accord”, and four natural raw ingredients that add facets to the note. The floral notes (orange blossom, Bulgarian rose) add femininity, tenderness and elegance. Frankincense intensifies the pure, mineral character of the lingering notes. Vanilla amplifies intimacy and sensuality.1

That, and the fact that Guichard apparently "delved into memories of his mother sculpting in marble, a contrast between the heat of the sculptor's hands and the coolness of the material"2 is really all you need to know — as described, UFO is a transparent incense-y skin scent, slightly metallic in the top notes, later, more mineral-ish than metallic, with a light, slightly milky sweetness and an almost-velvety finish. You might pick out some of the floral notes if you try, but it doesn't have a floral feel and it's more fun to ignore the notes entirely. It's highly wearable, a great match with the bottle, and I like it very much. You can pretty much ignore the "femininity" in the ad copy too — anyone could wear this, and while it's sheer, the lasting power is excellent.

Kenzo UFO / Unidentified Fragrance Object is a limited edition, and is $188 for 40 ml Eau de Parfum. It can be found at the Kenzo USA website or at Bergdorf Goodman.

1. Via press release from Kenzo.