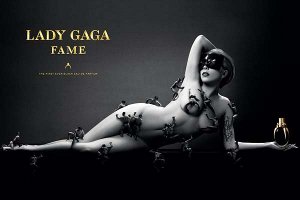 [Note: regular readers of Now Smell This, at least, those that don't skip all the celebrity perfume reviews, have already read this story so many times that a summary should suffice: Fame is exactly what any long-time watcher of the celebrity fragrance market would have expected it to be: a sweetish fruity floral of no particular distinction. Still, it's wearable enough, and even after spraying it on paper, I was willing to try it on skin, which is more than I can say for Selena Gomez Eau de Parfum.]

As I've said here before, I am missing some portion of the gene for true fandom.1 There are famous people whose work I enjoy and whose careers I follow with some interest, but I'm not interested in meeting any of them, I don't much care about their private lives, and I certainly would not buy a perfume just because some famous person's name was on it. Maybe because of that, or maybe because I'm rarely more than vaguely familiar with the celebrities who land perfume contracts, I look on the celebrity fragrance market with an attitude somewhere between bemusement and detachment.

Based on my experience as a fragrance consumer, I've come to the conclusion that famous people aren't any more likely to launch wonderful perfumes than anybody else. Based on my experience as a fragrance blogger, I'll add that many celebrities clearly lack the facility (or the power, or the interest) to make the sorts of licensing and development arrangements that might result in a superior product (and some of them don't even manage passable). As I've also said before, celebrity perfumes are not generally any worse than other perfumes at the same price point and geared towards the same market — most reasonably priced, widely-distributed perfumes aimed at young people (which is what your average celebrity fragrance is) are not all that good. Very few of them live up to their advertising, and the number of truly stellar celebrity efforts can easily be counted without using up all of your fingers.

This month's big money2 launch is Fame, the debut fragrance from pop star Lady Gaga. Her license went to Coty Beauty, the Coty division that also does fragrances for Beyonce Knowles, Celine Dion, David Beckham, Faith Hill, Halle Berry, Kate Moss, Kylie Minogue, etc. and etc.3  Fame launched with the usual promises, along with a few that weren't so usual. It would be edgy, of course (that Lady Gaga is widely perceived as edgy is apparent even if all you know is what you've gleaned from a few whacked out images from fashion blogs / tabloids plus the 90 minute Lady Gaga episode of Glee, and it probably goes without saying that my familiarity with Lady Gaga does not go much further than that). Lady Gaga said it would smell like blood and semen, but that was early on; later, she mostly backtracked, noting only that it would smell like an expensive hooker. Coty said Fame would "surpass all norms and standards in the fragrance industry with its innovative technology" because of the now-famous black juice that sprays clear,4 and that...

It’s unique because it’s not pyramidal with a top, middle and bottom note. It has a trampoline structure — notes are rising at different rates that are quite random. Some accords will come out if you rub it, other accords will come out later. It has random propulsion and doesn’t have a classic linear drydown. We call it push-pull, and it will smell different on different people. There is a different volatility for different notes, and they’re of differing strengths. They work together harmoniously, but then they undergo metamorphosis on the skin, so you’re constantly surprised.5

Got that? Now, here is what I can tell you about Lady Gaga Fame:

Fame is not edgy. I don't think anybody is going to smell Fame and think, wow, this is what I'll wear next time I'm walking through an airport in my undies whilst flipping the bird at the paparazzi or wearing a dress (and matching shoes) made of fresh meat. If you smelled it blind, you'd recognize Fame right away as a reasonably priced modern fruity floral6 from Macy's, slightly more grown-up than the average. Did Lady Gaga's fan base want a fragrance as edgy as the advertising for Fame?7 Not likely.

Fame does not smell like an expensive hooker. Fame smells like a modern fruity floral from Macy's.

Fame does not smell like blood or semen. Nor are they included in the notes, which turned out to be saffron, apricot, belladonna, tiger orchid, jasmine, honey and incense.

I was not constantly surprised while wearing Fame. The "trampoline structure" and "random propulsion" just didn't happen for me, or maybe the structure was too unique and complicated for me to discern. They did warn that Fame would smell different on different people, though — on me, it just smelled like the usual progression of a standard-issue modern fruity floral from Macy's, and it went right on smelling like that every time I wore it. The opening smells like apricot jam + grape Kool-Aid, the heart is your standard nondescript "flowers" with a pinch of spice and the dry down is a heavy, rather bland, dark-ish woody musk with a smidgen of incense and a velvety finish. Traces of the apricot jam do linger into the far dry down — maybe that is the push-pull feature?

Fame could be worse, but it could also be a lot better. I didn't expect Fame to smell sophisticated or expensive or risky. But I did expect some spark of life, some element of fun, whether it be a bright and lively sort of fun (Britney Spears Fantasy, Jennifer Lopez Miami Glow) or a warm and sexy sort of fun (Jessica Simpson Fancy Nights, Halle by Halle Berry, Queen by Queen Latifah) or a sugar bomb kind of fun (Jessica Simpson Fancy, With Love Hilary Duff) or a weird kind of fun (Sarah Jessica Parker Covet) or, if all else failed, maybe just a hilariously vile kind of fun (Paris Hilton Heiress).8 Fame just doesn't have enough personality to compete with those fragrances, although if forced to pick, I might have to take it over Heiress.

Her fans would appear to adore it. Fame is obviously not being marketed to perfumistas, and if the few reviews I watched on YouTube are any indication, it was not a disappointment to its target market. It is too soon to say how well it will sell, of course. Early reviews on MakeupAlley are mixed; it's getting better ratings on Sephora.

The more I wore Fame, the more I came to think of it as a chillingly apt commentary on the nature of fame and the celebrity-fan relationship. But surely I have gone on too long already — let's save that discussion for the flanker, shall we? Now taking votes on the name of the first flanker! I'm hoping for an ephemeral boozy citrus called Fame: Your 15 Minutes.

1. Although I admit there was a day when I fully expected to marry Bobby Sherman when I grew up, and I would have taken David Cassidy as a second-best consolation prize. If you have no idea who those people are, you probably know way more about Lady Gaga than I do.

2. Women's Wear Daily estimates that Coty will spend $30 million on promotion and advertising in the first year. Via "A New Spin on Lady Gaga's Fame", 7/13/2012

3. The less widely distributed Coty Prestige division develops fragrances for celebrities like Jennifer Lopez, Gwen Stefani, Madonna and Sarah Jessica Parker; careful watchers will have noticed that some of the Coty Prestige names, Jennifer Lopez being the most obvious, have slipped into "direct-to-mass-market" status. And hey, what happened to the Harajuku Lovers line, anyway?

4. Via Prnewswire; and see also here.

6. Coty is calling it a fruity floral, so we'll go with that, but I would have pegged it as a fruity musk or a fruity floriental.

8. I stole the phrase "hilariously vile" from Luca Turin, who used it in Perfumes: The Guide. I am pretty sure that I have used it elsewhere on this site and attributed it to Tania Sanchez, his co-author. Sorry!