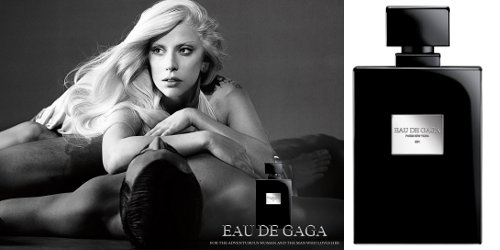 This sparkling, clean & pure ‘Eau’ expresses an ambivalent sensuality, free of gender, age & time. Get ready to experience the true essence of Gaga.1

Eau de Gaga is the second fragrance from Lady Gaga, and it launches without the extensive hoopla that surrounded Fame, her debut perfume. We do have the usual promises — "dangerously daring" and "dynamic and vibrant", says "Haus Laboratories",2 the entity that purports to produce the fragrance (with a little help, perhaps, from Coty) — but this time they've eschewed gimmicks like black juice that sprays clear, and Lady Gaga (unless I missed it) did not say any crazy stuff about blood and semen. Other than a few little flurries of excitement on Twitter and Facebook, the launch has been relatively low key.

The fragrance is relatively low key too. It does start with a show of spirit, in the form of a burst of lime and bergamot, but once that settles down, it's a relatively calm rendition of Earl Grey tea, accented with "hermaphrodite white violet" and "instinct leather".3 There's some creamy-powdery floral, a bit of herbal green, plenty of violet leaf, some very clean patchouli, and some very clean wood. The later dry down has a spicy edge to add some warmth, and the leather, while hardly strong (or animalic) enough to crack a whip, does a reasonable job of keeping Eau de Gaga from being too clean and pure.

Eau de Gaga leans more masculine than feminine,4 and the lasting power is quite good.

Verdict: We don't see a lot of unisex celebrity fragrances, and as near as I can tell, that's the "dangerously daring" aspect of Eau de Gaga. Indeed, I would think it was dangerously daring in terms of sales, so kudos to Lady Gaga and the folks at Coty for giving us a celebrity fragrance that isn't all lollipops and marshmallows, and that comes in a bottle that wouldn't embarrass an adult.

As for the juice itself, it's well done, and likewise wouldn't embarrass an adult. Still, the most unusual thing about Eau de Gaga is that it's from a celebrity and it isn't all lollipops and marshmallows. If it was from a designer brand, it wouldn't likely warrant much comment. Victoria at Bois de Jasmin called it a "21st century CK One", which is apt enough. She liked it more than I did, though, so do see her review.

Lady Gaga Eau de Gaga was developed by perfumer Ursula Wandel; it is available in 30, 50 and 75 ml Eau de Parfum.

1. Quote via Haus Laboratories. The term "ambivalent sensuality" is used in many of the press materials.