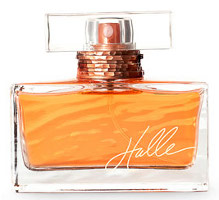 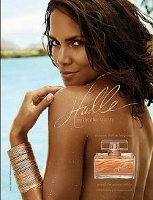 Halle by Halle Berry is the debut fragrance from the very popular actress, launching this month under licensing arrangements with Coty. According to Ms. Berry...

[Before my fragrance] I was mixing other brands that shall remain nameless to make my own scent with fig and mimosa. With Halle, I added olibanum, which is an African root, which brings spice to the fragrance, and sandalwood, which smooths everything out and makes it yummy. It’s very sensual, very natural, very much reflective of the outdoors.*

The two nameless fragrances are rumored to be from L'Artisan Parfumeur; if that's accurate, they'd presumably be Premier Figuier and Mimosa Pour Moi? Olibanum is another word for frankincense, which as any seasoned perfumista knows is a tree resin and not a root, but we needn't split hairs: Halle is darned good for a celebrity fragrance, especially given the price — Halle is geared towards "mid tier" and mass market stores, so you'll find it at Kohl's and Sears instead of Nordstrom and Saks.

Halle opens FRUITY and SWEET (and yes, I'm screaming on purpose), as is very nearly requisite for a celebrity fragrance. For the first few minutes, it could be any Britney Spears and/or Paris Hilton fruital concoction featuring a large slab of vanilla cake with caramel icing, but at about the 15 minute mark, the fruits and sugar start to calm, and it slowly evolves into the woody oriental we were promised (the notes: bergamot, pear blossom, freesia, fig, hibiscus, ultra mimosa, sandalwood, driftwood, cashmere musk, olibanum and sensual amber).

The heart is still sweet, but it's far drier than the opening. There are touches of creamy fig and a very smooth mimosa-ish note. It has a warm, almost-tropical feel — not suntan oil, really, although I do catch snatches of coconut early on, but "tropical flowers" (which shall also remain nameless; Halle smells entirely synthetic to me, and doesn't call to mind any particular flower, or, for that matter, any other material found in nature). The base is middling-dark woody-musky-ambery, and by the 1 hour mark, it's still creamy but it's very nearly dry enough that a man could wear it. There is something like the idea of frankincense, although it's very subtle.

It's unusual — and unusually sophisticated — for a celebrity fragrance, and it's very well done. There is something sexy about the far dry down. I can't say I entirely love it, but I'm impressed and I'd certainly wear it. It's nice to find something so reasonably priced that doesn't smell entirely generic, so I hate to quibble, but given that Ms. Berry seems to have good taste, it would have been interesting to see what they would have come up with if they'd gone the "prestige fragrance" route and spent a little more on the materials. As it is, it's very worth checking out.

The bottle, by the way, is fine, although the "metal rings" around the neck don't look quite so much like metal in real life, and even the top of the spray nozzle is clearly made of molded plastic. The lasting power is very good.

Halle by Halle Berry is available in 15, 30 and 50 ml Eau de Parfum and in matching body products.