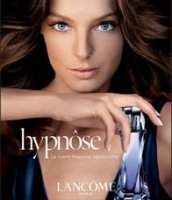 Lancôme will launch Hypnôse this fall in Europe, early 2006 in the US:

The aim of the launch is to match the success of that of Trésor and Magie, our biggest fragrances,” Lancôme’s international marketing manager Chiara Allegri tells Cosmeticnews.com. The twisted-styled bottle is a slender version of the original Magie bottle created in 1950. The warm oriental woody scent is constructed around the traditional Magie vanilla and vetiver ingredients, as well as passion flower and white florals, signed Annick Ménardo and Thierry Wasser of Firmenich. (via cosmeticnews)

Cacharel will launch Promesse, its first fragrance designed specifically for the US market, in August. It was created by noses Carlos Benaim and Sophie Labbe, and has notes of blackberry, mandarin, bergamot, sambac jasmine, orchid, amber, musk, cedar and sandalwood. 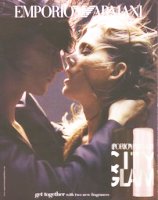 City Glam's juices were concocted by Annick Menardo of Firmenich. City Glam for her is a chypre eau de parfum, with top notes of blackcurrant, mirabelle plum and coriander. At it heart are notes of Bulgarian rose; while Indian patchouli, crystal moss and white musk notes are at its base.

City Glam for him is a fresh woody eau de toilette with top notes of bitter orange from Tunisia and peppermint from Brazil. Ginger and galanga from China are at its heart, while its drydown comprises vetiver from the Reunion island, white musk and crystal moss notes. (via Women's Wear Daily)

Update: see a review of Armani City Glam for Him.