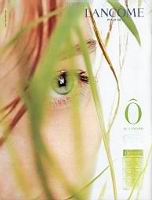 It is finally warming up here today, so I am breaking out the summer fragrances. Ô de Lancôme was created by perfumer Robert Gonnon and introduced in 1969, and reformulated in 1994. It is a classic Eau Fraîche, with notes of mandarin, lemon, bergamot, jasmine, rosemary, basil, honeysuckle, sandalwood, vetiver, and oakmoss.

Ô de Lancôme is classified as a fresh citrus chypre. The top notes are very sharp citrus, with a diffusive quality that makes me suspect that there is a touch of aldehydes. It calms to a crisp, leafy-green citrus with herbal notes and quite a bit of oakmoss. It gets a bit darker and woodier as it dries down.

It is light and summery but has good lasting power (for an Eau Fraîche, mind you). It is nicely done, but I do not like it as well as other fragrances in the same category, such as Eau de Guerlain and Chanel Cristalle Eau de Toilette. Ô de Lancôme smells comparatively flat to me after about 30 minutes.

It is marketed as a feminine fragrance, but it is no more feminine than any of the unisex scents on the market. Despite that, in 1996 Lancôme introduced Ô Pour Homme, which I have never tested, and which I believe has been discontinued. There was also at one time an Ô Intense, and Lancome still produces Ô Oui, which I have also never smelled. It is described as a sparkling floral.

Ô de Lancôme qualifies for the "cheap thrills" category only if you shop carefully. At the moment, a 2.5 oz at scentiments is $24.38.

I will not post again until Monday, have a great weekend!