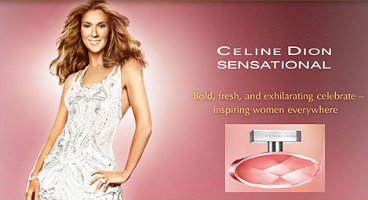 So far this week we’ve reviewed one teenaged celebrity’s fragrance and one from a country western star. Now we move to Las Vegas and multi-octave ballads with Celine Dion Sensational.

I can’t name one of Celine Dion's songs except for the one that went with the movie Titanic. The only reason I remember that song is because two of my cousins chose it to play as they walked up the aisle at their double wedding. They were both hugely pregnant. When they met their grooms at the altar and swung their white satin-draped bellies to face each other, the connection between mammoth sea vessels and their nuptials became apparent, and the Celine Dion song was stuck in my brain for good.

Sensational opens with plenty of pear. I don’t normally mind pear, and sometimes — as in Bill Blass Nude or Annick Goutal Petite Chérie — I like it a lot. But here it smells cheap to me, like another predictable fruity floral or maybe a scented hand wash from the grocery store. The pear never gets too sweet, though, and thankfully the perfume evolves.

After twenty minutes or so, the pear hushes a notch, and dry, winy rose and mimosa step up. As the mimosa kicks in, the fragrance warms and softens and smells much less industrial. Its texture changes from the flat, cold pear to a fluffier, more velvety floral heart. Fruit still rides in the background, but now it feels like an extension of the rose with maybe a touch of violet. I don’t smell any distinct iris or muguet.

Sensational’s mimosa holds its own against the rose-fruit combination. Usually I think of mimosa paired with more creamy or almondy notes, and it’s interesting to smell it here. Interesting, but not particularly compelling — at least, to me. But it does smell grown up and doesn’t pull from the hackneyed playbook of fruit and patchouli or flowers and woody musk.

Over the next few hours, Sensational doesn’t change too much, but fades into a quiet, sweeter, rose-inflected musk. It lasts about four hours on me and wafts a three or four foot sillage.

Once this review is loaded into the computer, I don’t ever see myself wearing Sensational again. It’s not like Hannah Montana, where even the sight of the bottle gives me shivers, but it reminds me a little too much of a Mrs. Meyers cleaning product. Sensational is fine, and I can imagine someone truly loving it, but that person isn’t me. It’s kind of like how I feel about Celine Dion’s music. It’s great while I’m on hold, but that doesn’t mean I’ll shell out for a CD any time soon.