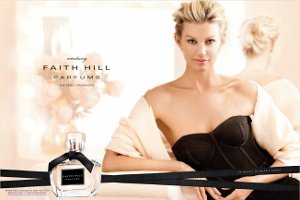 After yesterday’s Hannah Montana fiasco, Faith Hill by Faith Hill Parfums is balm to the nostrils. I really like McGraw by Tim McGraw, her husband's first fragrance, and I was hopeful Faith would pull through with something equally well constructed and pleasing to wear. She did. Faith Hill Eau de Toilette has an easygoing elegance that’s hard to beat at twice the price.

Perfumer Caroline Sabas (author of Natori Eau de Parfum and Britney Spears Midnight Fantasy, among others) developed Faith Hill, and it launched in 2009. Its notes include pink peony, pear, neroli, Southern magnolia, gardenia, jasmine, cashmere skin musk, vetiver and iris. The fragrance’s overall effect is smooth, clean, and silky, with a grown up — but not overly ladylike — air. I can’t pick out Faith Hill’s pear, and its gardenia and jasmine aren’t the buzzy divas they could be, but gently complement the magnolia’s barely tart whipped cream scent. A kitten’s paw of clean-soft musk that reminds me of Donna Karan Cashmere Mist cushions the fragrance.

Faith Hill doesn’t break new ground scent-wise, but it doesn’t pander to trends, either. Faith Hill isn’t about making a statement. It’s a graceful, unobtrusive fragrance that could most simply be described as “pretty.” I bet a lot of people who generally don’t like perfume would get along well with Faith Hill. People who generally favor more assertive fragrances might appreciate Faith Hill for their lounging-on-the-couch days when they want comfort that isn’t drenched in amber, vanilla, or sandalwood.

Faith Hill reminds me of the value of the nicely made background fragrance, the perfume that plays a supporting role instead of grabbing the microphone. I can’t say I love Faith Hill, but I don’t think the fragrance is about inspiring passion. It’s more like the cashmere cardigan you keep handy on a hook in your closet to pull on without thinking, the sweater that one day you realize is sprouting holes because you’ve worn the heck out of it without even paying attention.

Faith Hill’s downside is that it’s a quiet fragrance that stays very close to the skin after the first half hour or so. Then again, this could be seen as a benefit. No one will turn his nose up at your sillage, and you don’t have to worry about overdoing it with the spritzer. You can rest assured knowing that the people you’re with may not pick out your fragrance right away, but they’ll notice something warm, fresh, and welcoming about you.

Faith Hill Eau de Toilette is available in 15 ml, 30 ml, and 50 ml sizes. It’s available at drugstores, un-fancy department stores, and online discounters at prices ranging from $7.50 to $31 depending on the size and where you buy it.