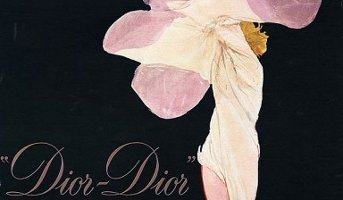 A few more spritzes from my sample tube, and there it goes — the last of my Christian Dior Dior-Dior. Finished.

Lately I’ve been working my way through the crystal cocktail glass storing my most precious samples. A few unexpected (and in one case, fatal) accidents in my world during the past few weeks have startled me out of complacence. We’re not going to live forever. Meanwhile, those few drops of old Guerlain Mitsouko parfum, that dram of Lanvin Scandal parfum, that tiny vial of Christian Dior Dioressence parfum, and, yes, a two ml spray of Christian Dior Dior-Dior Eau de Toilette were going unappreciated. I put an end to that. It’s hard to use a vintage, discontinued fragrance knowing that when it’s gone it’s likely gone for good. But enjoying a perfume sure beats simply having the perfume.

Perfumer Edmond Roudnitska developed Dior-Dior, released in 1976. Dior-Dior is a fresh green floral chypre tart enough to slice through the muggy July heat, but with an animalic edge.

At first, Dior-Dior is a shattering mix of citrus and green narcissus with a tiny hint of watery melon. It smells fresh as an icy cologne slapped on after a shower. People new to perfume might be a little put off by Dior-Dior’s force, but sit tight, because within minutes the fragrance settles closer to the skin and softens. Its frisson of crisp spring flowers sweetens just a little to become Audrey Hepburn elegant and clean.

Complementing all this ladies-who-lunch freshness is a naughty hint of civet. If you fear Dior-Dior might be too much like Hermès Eau d’Hermès (another Roudnitska creation and a total skankfest), don’t worry. I’d rate Dior-Dior a two on the skank scale, compared to Eau d’Hermès’s nine.

Finally, what smells to me like oakmoss, dry wood, and a hint of musk cushion Dior-Dior and round it out. Dior-Dior is refreshing and angular, full of lively springtime, but I wouldn’t call it sheer or one-dimensional. It smells like a real perfume — a fascinating mix of textures and sensations. The tingle of jasmine and narcissus, the almost tannic green notes, the fuzzy, earthiness of wood-softened moss, and the shock of civet keep my nose glued to my arm.

Dior-Dior could have been the fragrance of Belle de Jour’s heroine. She’s meticulous and proper with a glossy chignon and unimpeachable manners, but her afternoons are a different story altogether. 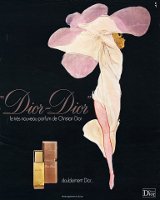 Now that my sample vial of Dior-Dior is empty, I’ll tuck it among my lingerie and hope its ghost appears when I shake out a slip or put on a nightgown. That’s o.k. It’s a far sight better than not having had worn it at all.