So yes, I’m jaded, but I don’t think I have a closed mind: if these are wonderful, I’ll be thrilled.

That's me, commenting on the post that announced the then-upcoming Collection Extraordinaire from Van Cleef & Arpels. That article elicited a number of skeptical comments, including my own, about the glut of multi-scent luxury perfume launches — many of which turn out to be less interesting than the prices and the fancy packaging would suggest — and then a discussion about whether some of us were perhaps a bit too jaded.

I might be too jaded, who knows? It doesn't seem to me to be an important issue: I say what I like in the comments, but I go right on smelling and looking for beauty regardless. And whatever my original suspicions, I did keep an open mind when I smelled the Collection Extraordinaire, and yes, I'm thrilled. This is a lovely collection. All six are worth smelling, and one, Bois d'Iris, captured my heart thoroughly enough that I laid out the $185 (!!) for it on the spot, thereby blowing my third quarter damage tally, which up until then had been a very gratifying zero.

Bois d'Iris is one of two unisex fragrances in the collection, the other being Cologne Noire.1 It's a must try for iris fiends. It was developed by perfumer Emilie Copperman, and it's worth considering the ad copy, which is closer to the truth than usual:

Bois d'Iris imagines the scent of wood from a totally different angle, without the forest, leaves and earth. Created to replicate the scent of driftwood on the seashore, Bois d'Iris is an atypical and enchanting woody blend created by a minimalist and ultra-qualitative structure. Precious essences of exotic wood are punctuated with a vibrant, salty note of ambergris, while a beautiful powdery iris lends soft elegance,reminiscent of Tuscany.2

So. This is not the sweet, leathery-chocolate iris of Dior Homme, nor is it the cold swirling roots of Serge Lutens Iris Silver Mist, nor is it the elegant powder of Frederic Malle Iris Poudre. There isn't the earthiness of The Different Company's Bois d'Iris, nor the metallic transparency of Hermès Hiris. It isn't brisk and outdoorsy like Divine L'Homme de Coeur, or delicate like Acqua di Parma Iris Nobile Eau de Toilette. And yes, it's minimalist, but not nearly so much so as Chanel's 28 La Pausa.

Bois d'Iris is, as described, a woody iris; it did not call up driftwood in the same immediately obvious sense as say, Andrée Putman Préparation Parfumée, but once I read the description, it all fit. The opening is citrus-y iris, lightly sweetened, rather creamy, and peppery-spicy with something that smells almost like clove (the notes: sweet notes, frankincense, iris, driftwood, vetiver, ambergris, labdanum, myrrh, vanilla). It gets sweeter and more vanillic as it dries down, and the spicy notes fade, but the whole thing is layered over a very dry, almost-smoky pale wood, so to my nose, it never gets to the foody stage, and the sweetness in the later stages is from the myrrh as much as the vanilla. 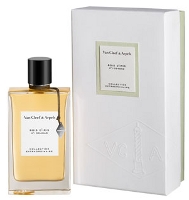 The dry down is powdery, but there's nothing frou-frou or girly about it. The amber recalls the salty, almost-transparent treatment of Hermès Eau des Merveilles, and it adds an airiness to the fragrance, although it isn't otherwise what I'd call a sheer fragrance. On the other hand, it isn't heavy either: several good sprays make it though the day, but near the end, it's close to the skin: if you're looking for something with impressive sillage, you might need to look elsewhere.

Is it worth $185? I have no idea. It's awfully expensive, but I don't find it as ridiculous as the $165 they were asking for the recent Sisley cologne trio, and I've paid as much for several fragrances from Hermès. But $150 makes me gulp, and $185 makes me gulp even harder. I don't like spending that kind of money on perfume, but I'm a sucker for a good iris.

Van Cleef & Arpels Bois d'Iris is part of the Collection Extraordinaire, and is $185 for 75 ml. In the US, it can currently be found at Neiman Marcus and at Van Cleef & Arpels stores. According to Women's Wear Daily, the Van Cleef & Arpels boutiques will also carry a limited edition coffret with all six fragrances: if anyone knows what the size of those bottles is, please comment!

1. I'm not sure, but I think Van Cleef & Arpels is marketing Bois d'Iris as feminine, so I'm basing that on my own nose. The other four scents are more conventionally feminine florals, although of course that doesn't mean men can't wear them.

Note: image is Driftwood Pattern 1 [cropped] by PlassPhoto at flickr; some rights reserved.