Today's post came out of a quick email conversation with Kevin, who noted that he thought that Van Cleef & Arpels Bois d'Iris smelled an awful lot like Odori Iris.1 I remembered liking the Odori well enough when I tried it, but it certainly wasn't love-at-first-sniff like the Van Cleef & Arpels. It seemed worth pulling the sample out to investigate. As so often happens, the one sample you need is the one you can't find, but I'll spare you the details of the 2-hour search: I did emerge victorious. 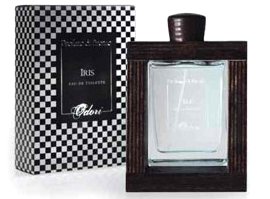 Odori, if you remember, is an offshoot of the Italian niche line Bois 1920. The six fragrances that launched in 2008 were all supposed to be masculine, as is reflected by the heavy wood packaging.

Odori's Iris starts out with the dry, rooty iris that I love, but it quickly turns sweet: heliotrope and a very faint star anise give it a lightly gourmand, sweet-iris-for-men aura, à la Dior Homme (which it is nothing like, mind you). In the early stages, it's dewy and bright. While the Van Cleef & Arpels is taking on peppery driftwood notes, the Odori strays farther into sweet with ylang ylang and a pale, ambery vanilla base. It never gets terribly sweet, and it stays more bright than not.

One hour in, the Bois d'Iris is a lightly sweetened, creamy-peppery iris woods with a touch of vanilla. The Odori, without the dry woods of the Bois d'Iris to counteract the sweet notes, smells like a sweet-ish vanillic floral with iris: it's less rooty, and has a cleaner finish. We all (mostly?) agree that perfumes have no gender and everybody should wear what they like, but if I were wearing these blind, I'm pretty sure I'd peg the Odori as the feminine and the Van Cleef & Arpels as the masculine. More than that, I'm pretty sure I'd pick the Odori as the mainstream entry (it's nicely done and pretty enough, and not all that unusual) and the Van Cleef & Arpels as the niche (it's fabulous, a little offbeat and smells like a serious investment was made in the materials).

Whichever one you prefer, there are no bargains to be had here: Odori Iris is $210 for 100 ml Eau de Toilette. It's a wee bit cheaper per ml than the Van Cleef & Arpels, but they're both pretty spendy. For buying information see the listing for Odori under perfume houses. 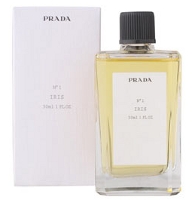 As long as I was wearing the Odori and the Van Cleef & Arpels, I thought I'd pull out Prada's No. 1 Iris. This is Prada's original Iris, from the Prada Exclusives range. It launched in 2003 as part of a quartet, and I don't think Prada ever gave any serious consideration to marketing them on a wide scale, or perhaps on any scale at all — did they specifically ask for the cap to be made to look like toothpaste? The first time I went to smell the exclusive series in Prada's Soho boutique, they were sitting forlorn and abandoned on a shelf in a back room over a rack of clothing; the second time, they were in a storage closet and someone had to fetch them for me, and then none of the staff could figure out what they might cost if, perchance, I wanted to buy one. Since then, Prada has added six more scents to the set, but they've never built up a rabid fan base as have similar projects from Hermès (the Hermessences) or Chanel (Les Exclusifs).

Anyway, the iris was my favorite of the initial four scents, but after the second trip, I decided I didn't need it. Later, after Prada launched Infusion d'Iris (and I decided I did need that one), I thought it might be interesting to revisit No. 1 and see if I'd missed something. No, not really. This is a very pleasant, rather middle-of-the-road iris, well-executed but not terribly exciting (the notes: iris, neroli and musk mallow, orange, vetiver, sandalwood, myrrh, incense, coumarin and musk). It's more buttery than rooty, but it doesn't have the luxurious, best-iris-money-can-buy feel of Chanel's 28 La Pausa, nor does it have the depth of the Van Cleef & Arpels. If you've smelled Infusion d'Iris, you'll recognize the similar notes, but if I was wearing this and the Infusion blind, I don't think I'd ever pick the No. 1 as the costly exclusive: the Infusion is comparatively sheer, but it has some lift; the No. 1 smells comparatively lifeless. After wearing the two together for several days, it was the Infusion that stuck in my mind; I find it hard to conjure up any memory of the No. 1 when I'm not wearing it.

I don't know what Prada No. 1 Iris costs in the US — if you know, please comment. At Liberty of London, its £103 for 30 ml Parfum. I seem to remember that it came in larger sizes as well (again, please comment if you know) and you used to be able to find the whole series at Bergdorf Goodman as well as at Prada boutiques.

1. I don't think he had tried them together and it was just an offhand comment, so I'm not meaning to pick on Kevin!