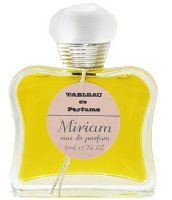 When I first dabbed on Tableau de Parfums Miriam Eau de Parfum, I couldn’t get the thought out of my head that it reminded me of something. Something vintage. What? I smelled my wrist and concentrated. Calm, snuffy aldehydes. Lots of violet. Creamy sandalwood. Then it hit me: Miriam smells an awful lot like Balenciaga Le Dix. Once I wore them side by side, I could see that Miriam and Le Dix differ distinctly. But besides major notes, they share a feeling of gentle femininity that isn’t fashionable these days.

In describing Miriam, Andy Tauer says he puzzled over creating a perfume that recalls another era yet is still modern. He wrote, “My challenge was to come up with a fragrance that is born in the forties of the last century, but created today: How to find an aesthetic language that bridges this gap!”

Miriam does feel old fashioned, and I think it’s because of the violet that dominates Miriam at first. Some reviewers have suggested Miriam’s aldehydes give it its vintage feel, but lots of fragrances these days come fizzed to the gills with them. Estée Lauder White Linen, Natori, and Narciso Rodriguez Essence are just a few. On the other hand, clear, sweet violet is almost Victorian, and it must be a real trick to make a violet-centered fragrance smell comfortable to the average perfume wearer today. Balenciaga Paris succeeds in bringing violet to the 21st century, but it seems to do it by deliberately removing any hint of violet’s face-powder-candy-and-lipstick side. Other violet-infused fragrances, like L’Artisan Parfumeur Verte Violette and Guerlain Les Météorites, don’t even try to fight it.

As Miriam ages, it begins to smell more like a floral oriental than the clean, ladylike aldehydic floral of Le Dix. While Le Dix continues to waft violet, ylang ylang, musk, and sandalwood in its natal 1947 language, Miriam warms up and sweetens with vanilla. Lavender keeps the vanilla from turning to cake. I don’t know if Miriam’s warmth modernizes it exactly, but like Christian Dior Dune’s unexpected mix of amber and lavender, to me it does keep it interesting and less predictable.

If I had to describe Miriam the perfume as a woman, I’d say she was demure, down to earth, strong, and emotional. Ingrid Bergman comes to mind. While Le Dix spends the morning shopping in the city for doeskin gloves and little hats, Miriam is home in a flower-print dress, writing letters. My guess is not everyone will like Miriam, but the people who do like it will love it.

Tableau de Parfums Miriam Eau de Parfum is available at Luckyscent for $160 for 50 ml and $40 for a 7 ml purse spray. The 50 ml bottle comes with a DVD of the Miriam film and a novelette about Miriam Masterson.