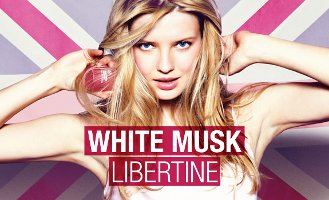 I was looking forward to The Body Shop's new White Musk Libertine. Admittedly, I was never a fan of the original White Musk, which has reached the grand old age of 30 — in perfume years, that means it's now eligible for social security. I did like (but didn't really adore) the White Musk Midnight Iris, and I'm always up for a cheap thrill of the scented variety. I know some people around here complain about The Body Shop not being what it used to be, but if I had $15 or $20 and wanted something scented from the mall, I'd be far likelier to find it at The Body Shop than at Bath & Body Works (I did some investigating recently and there's virtually nothing there I like any more) or L'Occitane (they've done some nice scents lately, but they've mostly upscaled themselves out of the cheap thrills category).1

So anyway, White Musk Libertine was developed by perfumer Vincent Schäller and the notes include Turkish delight, Chantilly cream, orchid and signature musk — sounds like a good contender for sweet but fun, right? And I'm already a sucker for sweet Turkish delight. If you could come up with a really good one for less than the going price for Serge Lutens Rahät Loukoum, I'd buy it.2 White Musk Libertine, as it turns out, is more of a nouveau powder + vanilla musk mash-up.

And it's not all that sweet. Despite the gourmand billing, it's no more than mildly sugared, and the vanilla cream (which isn't as as hard to come by as Turkish delight) is really the star player. On my skin, it runs something like this: first, a bright, pinkish fruity-floral opening, closer to 'chain store cherry blossom' than to the glorious cherry cough syrup of Rahät Loukoum. Then a creamy vanilla, slightly fizzy at first, over a musky base that is similar to the original White Musk, but softer, not so harshly clean and white. There's a vague hint of something nutty, and later, an even vaguer hint of middling-dark woods mingling with what eventually builds to a decent level of powder. It's sheer in any case, and like many white musks, it can be very hard to smell consistently, that is, the lasting power (for the Eau de Parfum, which is the only version I tried on skin) is excellent, but it induces olfactory fatigue quite rapidly.

Would I buy it? Well, strictly speaking it is not something I need. But the day I walked into The Body Shop to try it, a nice lady was letting customers reach into a bag and pull out a little paper square. You ripped off the top and it told you the discount you could have if you bought something. My square said 50%, and in no time at all I was walking out with a half price bottle of the Eau de Parfum for $12, and since we all know $100 is the new free when it comes to perfume, it's very nearly like they paid me to remove it from the premises.3 If they used the same marketing tactic at Neiman Marcus, I'd be in very big trouble.

1. Lush is still a viable option on the cheap thrills front; some of the body products are crazy-expensive but the twist-up solid perfumes are still only around $10 a pop. In all fairness, L'Occitane has a $10 solid of the new Délice des Fleurs, too. I was very sad to see Crazy Libellule & The Poppies go out of business though — they were a reliable source of under-$15 fun. Pacifica's roll-ons ($12) and solids ($9) are still affordable, and easily found if you've got a Sephora nearby. If you have a favorite budget perfume option I haven' t mentioned, do comment!

2. Some of you old-timers may remember a time when reasonably priced replacements for Rahät Loukoum were a frequent topic of discussion on MakeupAlley's fragrance board. Personally I never found one that really did the trick, but I just checked and you can still buy an oft-mentioned contender, Lagniappe Oaks' Lady Evangeline, in a travel sized Eau de Toilette for only $7.50 at Bourbon French in New Orleans.

3. Newbies take note: you may think that what you need to graduate into real perfumista-hood is to familiarize yourself with the output of 20-odd obscure niche perfume houses, but a handful of really excellent rationalizing strategies will serve you just as well over the long run.