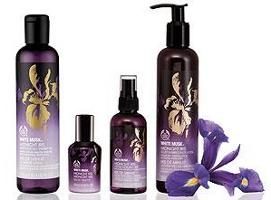 I'll start with the verdict: I was pleasantly surprised, but largely because my expectations were not especially high. When Angie reviewed the original White Musk, she noted that "someone wanting a sweet, warm musk could do a lot worse", but also that it was "compressed and dull" (although in all fairness I should point out that the latter comment was elicited by an on-skin comparison to Serge Lutens Clair de Musc, a considerably more expensive fragrance). That would be about my take on it too: nice enough, not terribly interesting.

In this case, I'd say the flanker is at least more interesting than the original: White Musk Midnight Iris is warmer than White Musk, and not so squeaky clean. It has more oomph, and it wouldn't be so easily mistaken for a nice-smelling detergent. It starts with citrus and peppery-earthy iris, with noticeable clary sage (the full notes: bergamot, water lily, muguet, clary sage, iris, musk, sandalwood and tonka bean). If the iris stayed peppery-earthy longer than it does, I'd have bought several vats, but it fades to a more basic sweetish/powdery iris, only slightly earthy, over basic watery florals fairly quickly, and eventually it smells like the original White Musk smoothed over with a touch of iris. Then I don't love it quite so much.

I did a version of Angie's comparison: I tried White Musk Iris next to Prada Infusion d'Iris and my recent favorite, Van Cleef & Arpels Bois d'Iris. A blind smell-test was not possible so perhaps I am kidding myself, but it seemed to me that anyone smelling the three would be immediately able to line them up in order of price: the White Musk Midnight Iris smelled clunky and obvious, like perfume-by-numbers, next to its two more expensive compadres. It made the Bois d'Iris smell even richer and more crazy-expensive than it is, and the Prada fell neatly in between.

Still, it goes without saying that most people don't try perfume that way. For a budget fragrance, White Musk Midnight Iris is really nicely done, and while it may not work your average perfumista into a lather, it's worth a shot if you love iris and want a cheap thrill.

It's hard to beat The Body Shop's prices. White Musk Midnight Iris is $17 for a 30 ml bottle of Eau de Toilette. The bottle is not fancy: the design you see in the images above is printed on a plastic outer sleeve, not on the glass, and because they've dispensed with (admittedly wasteful) boxes, there's an unattractive warning label printed right on the back. If you want something even cheaper, the 100 ml Chiffon Sheer Body Mist is only $15. I wish I'd taken a moment to sniff the Shower Gel ($250 ml for $15) or the Body Lotion (250 ml for $16) but I didn't think of it until later — if you've tried either, do comment.