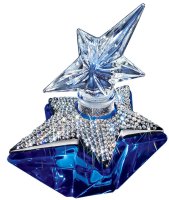 Aged in the same way as a fine cognac in cherrywood barrels, the Angel La Part des Anges Extrait de Parfum adds a new starry dimension to the heavenly fragrance of Angel. Overseen by a true French cellar master, an expert in the aging of cognac, a celestial 12-week aging process has produced a one-of-a-kind perfume extract. Angel's delicious scent is enriched and captured through a harmonious evaporation process. The exquisite fragrance is contained in a sparkling precious star, dressed with Swarovski crystals in celebration of Angel's 15th anniversary. A certificate of authenticity is provided, and each bottle is engraved with its individual number.

Prior to the aging process, the parfum was reworked by perfumer Francoise Caron; the aging process (according to both press accounts linked below, comprising 23 weeks and not 12) was overseen by Pierrette Triche of Rémy Martin. The result is a concentrated, rounder version of Angel, with accents of candied fruits and amber.

Thierry Mugler Angel La Part des Anges is a limited edition (4742 bottles were produced). It is available now at Nordstrom, and is $220 for 10 ml parfum extrait. (quote via nordstrom, additional information via levif.be, cosmetiquemag.fr) 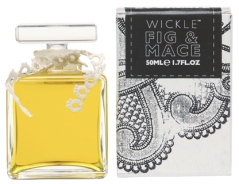 Wickle has introduced a new fragrance (and their first all-natural scent), Fig & Mace. It is described as "a sweet, fruity scent with a hint of spice and a sensual woody basenote".

Wickle Fig & Mace is £25 for 50 ml, concentration unknown. (via ticklemywickle)