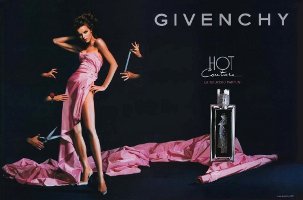 Hot Couture has hovered at the edge of my fragrance consciousness for years, but I never actually tried it until this week, when I was feeling particularly jaded at Sephora and I wanted to smell something, anything that wasn't a summer limited edition. And now that I think about it, I'm intrigued by this fragrance: Hot Couture has been holding its place in the Givenchy section of perfume counters since it was released in 2000, yet it's such a "neither/nor" fragrance for the venerable brand. It's neither Audrey Hepburn nor Liv Tyler, neither the classic L'Interdit nor the blandly trendy Very Irresistible and all its flankers. Nor is it one of Givenchy's coming-on-strong fragrances of the 1990s, like Amarige or Organza. What is it?

In Givenchy's official (and generally meaningless) description, "Hot Couture is a creation that aims to complement the woman's body, combining sensuality and glamour with refinement and elegance. Very fashionable, the Hot Couture woman is both refined and original, slightly provocative and so uniquely charismatic." Hot Couture is "a voluptuous fragrance with spicy and woody notes (raspberry nectar, magnolia, amber-vetiver)," and it was developed by perfumers Alberto Morillas and Jacques Cavallier. Its title is a silly pun on "haute couture," and the bottle's logo looks like a dressmaker's label with pinked edges. (The older bottle design bore an image resembling a vintage fashion sketch.)

Hot Couture starts off with a flashy burst of raspberry and vanilla that feels more like the late 1980s than a nostalgic take on the 1950s or 1960s. Just when you might think it's all too fruity-sweet, the top notes do settle down a little bit and turn slightly creamy. The berry theme never completely disappears, but the rest of the fragrance develops into a woodsy amber with a sort of honeyed tobacco note around the edges. A little later, there does seem to be a sweet white-floral note mixed into the amber. It's not a very nuanced or layered scent — it's fairly linear after that sugary-pulpy assault of its opening — but it's appealing in a slightly tacky, going-out-with-the-girls kind of way.

When I did a little internet sleuthing on Hot Couture over the past few days, I was surprised to see how many reviews it has received on Makeup Alley and the Sephora website. I suppose I really am one of the last to try it. I can see why it's popular with many of its users, though; I'm guessing that it appeals to women who are looking for something in the vein of Flowerbomb and Pink Sugar, although it predates both of those and it's less sweet than either one.  It also feels like a high-rent cousin to  Bath & Body Works Blackberry Amber or a bolder step-sister to Bond no. 9 Bryant Park, a more recent fashion-inspired fragrance based on a similar pairing of raspberry and amber.

Have you ever heard the old advice that you should look in the mirror and remove one accessory from your outfit before you leave the house? Hot Couture definitely starts off feeling over-accessorized, but she does slip off her dangly chandelier earrings and blot her hot-pink lipstick after a little while. She's still not exactly an ingenue or the epitome of classic elegance, but she has a sense of fun. Sometimes, it's good to keep up an acquaintance with a person (or a perfume) like that.

Givenchy Hot Couture Eau de Toilette retails for $68 (50 ml) or $88 (100 ml), but you can usually find a few online fragrance discounters selling it for under $50. (There's also an Eau de Parfum, which I haven't tried.)