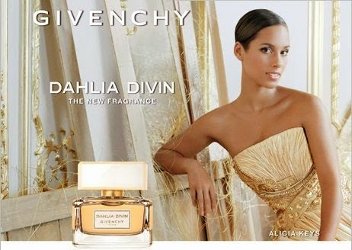 The question Angie asked yesterday in her review of Guerlain Shalimar Souffle de Parfum — at what point does a flanker stray so far from its parent that it ceases to earn the family name — is not the question I asked about Givenchy's new Dahlia Divin. Dahlia Divin may or may not be a flanker to Dahlia Noir, anyway,1 but if it is, it doesn't have all that much to live up to (with the usual apologies to its fans, I did not think Dahlia Noir was destined to become an enduring, beloved classic).

Dahlia Divin is presented as a fragrance for a modern-day goddess. It "lets you embrace your inner Golden Goddess" and "inspires us to want to be better, reach new heights and live life to the fullest".2 All of that can't hurt, I suppose, although I have a feeling the gown Alicia Keys wears in the commercial and print ads might be more effective than the fragrance — but of course, if you had the money for the gown, you wouldn't be looking for your next perfume among the mainstream designer options at Macy's.

Dahlia Divin starts sweet and fruity; there's the plum listed in the notes but also citrus and what smells like berry-apricot jam (the notes say "golden fruit"; also jasmine, white flowers, patchouli, vetiver and sandalwood). It's on the warm side, and it gets warmer as it dries down into a jasmine-ish blended floral with a woody musky base, still quite plummy, and darkened a bit by some modern (i.e., scrubbed clean) patchouli. It has more emphasis on the florals than did Dahlia Noir, and it's full-bodied enough to stand up to cool weather (and by the same token, I would find it a bit heavy for typical August weather, only we're not having typical August weather this year). It's slightly dark, almost but not quite full-on into oriental territory — you could call it a woody floral or a modern chypre or a neo-fruitchouli, take your pick. It has a soft, slightly powdery finish with a whisper of vanilla, only lightly sweet.3 After a very long wait, it does get somewhat bit earthy, but not more than that.

Verdict: I called Dahlia Noir pleasant, wearable, competently done and not unsophisticated, and I'd say the same of Dahlia Divin. Neither scent is wildly distinctive, but to my nose Dahlia Divin is prettier, and it's not quite so faceless as Dahlia Noir. I don't think it's likely to attract huge numbers of perfumista fans, and it didn't do anything to change my mind about Givenchy as a fragrance house,4 but if you like warm, plummy florals and want something up-to-date, it's certainly worth a try.

The quick poll: have you smelled anything, good or bad, from the upcoming crop of fall department store launches? Do tell us about it! 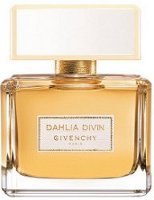 1. A proper flanker would presumably be called Dahlia Noir Divin, plus, the bottle is different, and from what I've seen the brand is not presenting it as a flanker to Dahlia Noir (although admittedly the latter is often true of fragrances that I would definitely classify as flankers)...so you could argue Dahlia Divin is merely the second in a series, or you could argue they were just too lazy to come up with a new name, or that they hated to let the name Dahlia go to waste after Dahlia Noir didn't sell as well as they hoped.

4. Givenchy hasn't made anything I really wanted to buy since 1999's Organza Indecence, although I haven't smelled a single one of the recent L'Atelier de Givenchy fragrances.