Are there any recent releases you'd love to see us review? Do comment. 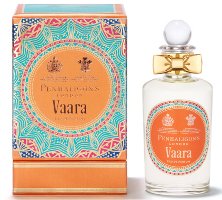 Penhaligon's new Vaara has a great backstory: it was a private commission by His Highness Maharaja Gaj Singh II for his granddaughter Vaara. Perfumer Bertrand Duchaufour reportedly traveled through India looking for the perfect ingredients "to create a scent fit for royalty". Of course, he's already done much the same — albeit probably without leaving home — for the four India-inspired fragrances he created for Neela Vermeire Créations (Trayee, Mohur, Bombay Bling and Ashoka), but Vaara stays squarely in what I think of as Penhaligon's territory.

It's a pretty and very wearable scent, starting off with bright citrus, liberally spiced at first, then soft. The opening stages are given depth and tartness by a dab of quince jam. It calms into a lovely, somewhat youthful floral (mostly saffron-tinged rose and magnolia), slightly sweet, with a velvety, mostly-clean finish. It's enjoyable to wear, but if you were after exotica,1 or even something that packs some oomph, Vaara is not likely to suit. Victoria summed it up perfectly at Bois de Jasmin: "It’s soft spoken and mild, a perfume for someone who really doesn’t like orientals or anything richer than frozen yogurt." 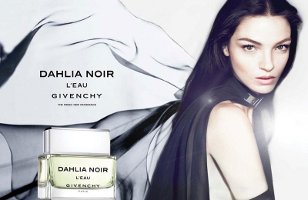 Here is the absurdly faulty logic that made me seek out a sample of Givenchy's Dahlia Noir L'Eau: I did not like the 2008 Chloé fragrance, but I really liked the 2012 flanker, L’Eau de Chloé, which was all done up in pale green. I didn't particularly like the original Dahlia Noir (although frankly, I'd rather wear Dahlia Noir than Chloé), but when they turned it pale green and added L'Eau for Dahlia Noir L'Eau, I figured, who knows? Maybe it'll be fabulous.

Well, no. I do like Dahlia Noir L'Eau a shade more than Dahlia Noir, but only because it's a shade more innocuous. It's a fresh floral of no particular distinction, a bit green but only a bit. It's subtle and clean, and summer-y, and perfectly pleasant and easy to wear. It's hard to describe in any more detail than that: it just smells like department store perfume in the 'modern and fresh' genre. Even more so than the original, it's comically at odds with the name 'Dahlia Noir', but whatever, right? If you liked Dahlia Noir better than I did, maybe you'll like this one better too.

1. If you do want exotica, and you want it from Penhaligon's, do try Hammam Bouquet or its modern successor, Elixir.