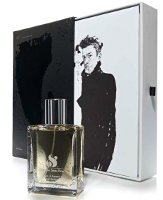 I was intrigued by the Series One debut collection from the Six Scents Fragrance Initiative when it was released in 2008, and I purchased Smells Like Teen Spirit (a collaboration between perfumer Mark Buxton and designer duo Preen) and wore it with pleasure for the next year or so. I somehow missed out on Series Two; last fall and winter was a chaotic time for me, so it may have just slipped past me. I've been much more aware of Series Three, although I'm not as familiar with the fashion participants this time around; on the other hand, most of the perfumers' names were familiar to me right away. Two of the of fragrances from this group that piqued my interest, in particular, were Fragrance 4 and Fragrance 5.

Fragrance 4, Ascent (shown above), is a collaboration between fashion designer Rad Hourani and perfumer Christophe Raynaud, with notes of pear, violet leaf, ylang ylang, rose, cedar, leather, incense, powdery musks, tonka bean and benzoin. This fragrance fascinates me because it has evolved differently nearly every time I've worn it over the past week. One time, it shifted quickly from greenish violet leaf to powder to dirtied leather and musk, as sequentially as a stop-action film of the sun rising and setting, or — as articulated by Hourani and Raynaud for the "childhood" theme of this series — a transition from infancy to adulthood. Another time, it was mostly baby powder with musk, like a slightly deeper cousin to I Profumi di Firenze Talco Delicato. And the last time I wore it, the watery green top note was followed by a clean leather note, and then a sensual rose note emerged from a base of smoky powder. Hourani is known for his androgynous "transforming" garments (zippered black-on-black layers, jackets that can be turned into vests, etc.), so maybe it's fitting that Ascent has been so varied on my skin. (It would also intrigue lovers of the naughty-classic Molinard Habanita.) 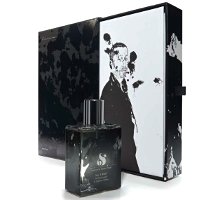 Fragrance 5, #087, is a collaboration between fashion design label N. Hoolywood and perfumer Stephen Nilsen, with notes of hiba tree, sugi leaves, green cypress, motor oil, salty-icy water accord, nutmeg, rosemary, hinoki wood, sandalwood and fir balsam. Daisuke Obana, the designer behind N. Hoolywood, has gained a cult following for his functional-looking menswear, which brings careful craftsmanship and detail to high-concept interpretations of uniforms and workwear; his memories of certain Japanese locations and Japanese foliage were the inspiration behind Nilsen's composition. For me, #087 starts off as a very leafy, piney fragrance; at first, it almost seemed too much like a sophisticated conifer-scented candle or room spray, but then it opened up to release the "salty-icy water" accord. I've never seen a hinoki or sugi tree, or been to the Kurobe Dam, but this contrast of dense greenery and cold, fresh air and water seems uncannily realistic. The fragrance's base is a polished, slightly sweet take on sandalwood and the wood of the above-mentioned trees, with the scent of the trees' leaves and needles continuing and deepening a bit. A fragrance like this one falls outside my familiar floral zone, but I found it unexpectedly calming and yet invigorating at the same time. In a video interview for this project, Obana expressed the wish for a fragrance that could provide the inhabitants of busy cities with a mental space for relaxation. I'm a city-dweller, and this idea makes total sense to me.

Have you tried these or any other fragrances from Six Scents' Series Three? Feel free to share your impressions in the comments section.

Six Scents Series Three Fragrance 4 Ascent and Fragrance 5 #087 are available in 50 ml Eau de Toilette ($149). A portion of the proceeds will be donated to War Child International. For buying information, see the listing for Six Scents under Perfume Houses.