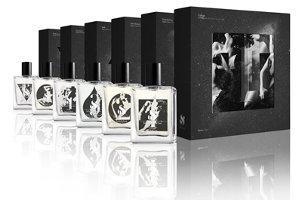 The Six Scents Fragrance Initiative will launch Six Scents Series Two next month. As was the case with Series One, the project will team six designers with six perfumers to create a series of limited edition fragrances:

Fragrance 1: Collage ~ by 3.1 Phillip Lim in collaboration with perfumer Nathalie Gracia-Cetto. [Notes: bergamot, black pepper, juniper berry, magnolia accord, patchouli, Virginia cedar and incense] [Collage is described by Nathalie Gracia Cetto as "a fresh and sensual unisex fragrance that can be worn all day long".]

Fragrance 4: Smell ~ by House of Holland in collaboration with perfumer Stephen Nilsen. [Notes: lilac, mimosa, pine forest accord, green grass, sheer jasmine and musk.] [Per Stephen Nilsen, "I was very inspired by Henry’s very specific visualization of the fragrance as an oversized, purple sofa where people would gather...It is an embracing hug of a fragrance that wraps you in its comfort."]

Fragrance 5: Nicoll 17 ~ by Richard Nicoll in collaboration with perfumer Rodrigo Flores-Roux. [Notes: Florentine fennel, fennel pollen, black basil, white iris petals, caraway seeds, sweet orange, angelica root, magnolia and ivy buds.] ["The fennel infused scent is a simple, minimalist fragrance from a perfumer who enjoys maximalism....Every single aspect of Florentine fennel as a garden plant and as a slivered delicacy in a summer salad was taken into account: its crisp green character, its sweet anise and sambucca like aspects, the crunchy texture of the opalescent green stalks, the earthiness of the roots, the airiness within its feathery leaves and umbrella shaped flowers."]

I will update with fragrance notes and prices when I can find them. (via newsletter from colette.fr)

Update: There will be 2000 numbered bottles of each scent, 50 ml Eau de Parfum for $95. A portion of the proceeds will benefit Pro-Natura. (via wwd, and notes above for Collage, Smell & Nicoll 17 also via wwd, later additions via luckyscent)